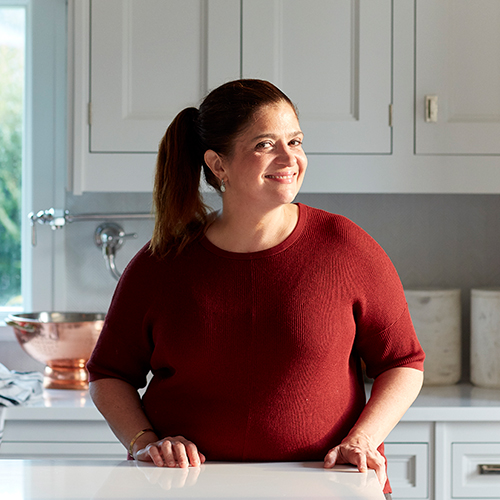 Guarnaschelli graduated from Barnard College in 1991 with a degree in art history and functioned for the lowest pay in a restaurant called an American Place for one year. However, her culinary venture began while watching her mother test multiple recipes at home while editing cookbooks.

Guarnaschelli is the daughter (and only child) of John and a cookbook editor Maria Guarnaschelli. She was born in St. Louis but moved to New York City when she was just a few days old.

On April 29, 2007, Guarnaschelli is happily married to her husband Brandon Clark. They met in 2006 at New York’s Institute of Culinary Education while Alex was teaching a fish class. They were blessed with a daughter, Ava, born in July of 2007.

The couple’s marriage finally ended, and in June 2020, she announced her engagement to chef Michael Castellon, a Chopped winner who had proposed to her on her birthday over the weekend of June 19–20. In February 2022, it was announced that the couple ended their engagement.

Guarnaschelli has an estimated net worth of $2 million.

Guarnaschelli was a competitor on The Food Network’s Iron Chef America, taking on Cat Cora in the 2007 “Farmers’ Market Battle.” Cora won the challenge. She has since emerged as a judge on the program. In 2011, she contested in the fourth season of The Next Iron Chef, where she placed as the third runner-up.

She also contested on the Food Network Challenge Ultimate Thanksgiving Feast episode and lost the competition. After competing in the fourth season of The Next Iron Chef, she became a sous chef to Iron Chef Geoffrey Zakarian. In 2008, she became the host of The Food Network’s The Cooking Loft with Alex Guarnaschelli, in which the chef instructs a small group of students on how to make new interpretations of definitive dishes.

Guarnaschelli starred in the Food Network television show Alex’s Day Off, which premiered in October 2009. It ran for three seasons and 32 episodes. She contested in season 5 of The Next Iron Chef: Redemption, winning in the final Kitchen Stadium showdown against chef Amanda Freitag. Her debut challenge as an Iron Chef on Iron Chef America aired on December 30, 2012.

Guarnaschelli made two guest appearances: first on the Nickelodeon television show Dawn, Dicky, Nicky, & Ricky on the one-hour special “Go Hollywood” on November 25, 2015, and later on the ABC television show The Real O’Neals in the episode “The Real Thanksgiving” on November 15, 2016.

She thereafter created three appearances: as a judge in episode five of Iron Chef Gauntlet, where chef Gruenberg was eradicated before the final showdown in episode six “The Gauntlet”., on the Food Network’s Beat Bobby Flay. She challenged Bobby with her signature lobster dish. She also won that challenge. She made a guest appearance on Billions and as a mentor on season 20 of Worst Cooks in America as the captain of the Blue Team, opposite Anne Burrell. Alex ultimately became the winning mentor. In 2022, she premiered Alex vs. America, also on Food Network.