A native of The Berkshires, United States, Dorinda Medley is a famous and popular American television personality and businesswoman. She was also a cast member on the TV show The Real Housewives of New York City from its seventh until the twelfth season.

Medley went to Franklin and Marshall College in Lancaster, Pennsylvania. She graduated in 1986, moved to New York, and began working in the showrooms of Liz Clairborne. Eventually, she got to learn more about fashion and business. Over the years, she started her own business.

Medley was born and raised in The Berkshires, the United States to Diane Medley (mother) and John Medley (father). She has 2 siblings John Medley Jr. and Melinda Handlowich. 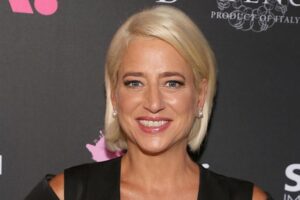 Medley has married twice in her life. She met her first husband in New York during the time she was working at Liz Claiborne. After some time, she wedded Ralph Lynch and was blessed with a daughter named Hannah Lynch.

The partners divorced after 10 years of marriage. According to the references, the reason was due to personal issues. After her divorce, she met Richard H. Medley who is the chief executive of RHM Global. The partners married in 2005. Richard had 2 kids named Paige Medley and Aidan Medley from past relations.

Additionally, the two had no children together. On November 16, 2011, Richard died due to liver failure. After his death, Medley did not marry again.

Medley has an estimated net worth of $20 million.

After finishing college Medley moved to New York and began working in the showrooms at Liz Clairborne. Later, she moved to London with her first husband. She began her own cashmere company, DCL Cashmere. Soon she affirmed herself as an independent millionaire entrepreneur. Unfortunately, she got a divorce from her husband due to personal issues. Then, Dorinda moved to New York with her daughter.

In 2005, she married Richard H. Medley. He is a retired Washington power financier and broker. Moreover, he was also a speechwriter for the congresswoman and vice-presidential candidate Geraldine Ferraro. Additionally, she began working with her husband on fundraising for causes. In 2015, she rose to celebrity unexpectedly. She made her appearance in the reality television show The Real Housewives of NYC.

It was one of the hit reality shows which has been a turning point in her career. After that, the people began recognizing her. Moreover, she is also a philanthropist. She has worked alongside Hillary Clinton, Brad Pitt, Desmond Tutu,  and Angelina Jolie. She has also appeared as a guest in shows like Hollywood Today Live and Fablife. Additionally, she has appeared in The Wendy Williams Shows and Watch What Happens. Moreover, she has launched her own line of accessories Talent Resources.