Jonathan Stuart Bailey a native of Oxfordshire is an English actor best known for playing the role of Jamie in the 2018 West End revival of Company. It earned him a 2019 Laurence Olivier Award for Best Actor in a Supporting Role in a Musical.

Stuart was born and raised in Benson, Oxfordshire, England. His father Stuart Bailey is a former managing director of Rowse Honey Ltd a honey manufacturer in the United Kingdom. Jonathan has four older sisters.

Bailey is openly gay. However, he is currently not in a relationship with anyone and has never been married.  Bailey talked about his experiences as a gay man to English actor Ian McKellen in a 2020 interview. 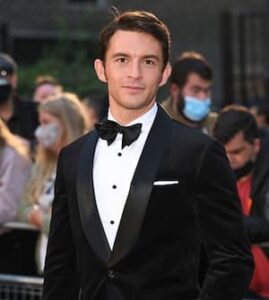 Bailey was cast to play the role of Viscount Anthony Bridgerton in the television series drama Bridgerton. The show is based on Julia Quinn’s novels and was produced by Shonda Rhimes. Bailey played the role of Leonardo da Vinci in the BBC series Leonardo. His other notable roles include; Jack Patterson in BBC’s W1A and Alfie in Me and Mrs Jones.

Bailey performed the role of Duffield in South Downs for which he won the Outstanding Newcomer at the Evening Standard Theatre Awards 2012 award. He has also appeared in several stage performances like; King Lear, and American Psycho. He won the 2019 Laurence Olivier Award for Best Actor in a Supporting Role in a Musical for his role as Jamie in Company.

Jonathan’s net worth is estimated to be in the range of $1 million – $5 million.