Jackie Goldschneider is an American Tv Personality who is best known for starring in Season 11 of The Real Housewives of New Jersey which premiered on February 17 at 9 p.m. ET on Bravo.

She is a former real estate attorney but has built a successful second career in real estate management and freelance journalism. Jackie authored a volume of personal essays about motherhood for different websites, including one for the site Scary Mommy. She joined the cast of Real Housewives of New Jersey in November 2008. 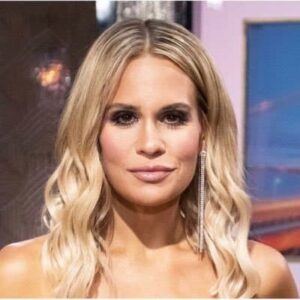 Jackie was raised in Staten Island, New York by her parents. She explained that her parents both “came from nothing,” and worked their way to success. Her mother moved from Israel to America as a young girl and was a talented software engineer. Her parents invested wisely in stocks and did quite well.

“My parents both came from absolutely nothing,” Jackie revealed. “My father grew up in the projects in Brooklyn and my mother grew up in Israel and came over here at 13 years old. She didn’t speak any English; her parents had not a penny.

They moved in with relatives in Brooklyn and my mom ended up graduating valedictorian of her high school. She went to Brooklyn College and she started a computer software consulting firm when she was in her late 20s, early 30s, and she ended up writing a lot of the software that huge companies were using… I love looking at her college yearbook because she was the only woman in the entire economies chapter of the yearbook.”

As for how her mother parlayed her career success into monetary wealth, Jackie explained, “My parents were very smart about it. My father also did very well for himself and everything that they made together, they started investing. They invested in stocks, they invested in real estate, and they really did amazingly well for themselves.”

Jackie is married to Evan Goldschneider who is an Entrepreneur and businessman. The two have been married since 2006. Together, the couple is blessed with f0ur child which includes two sets of twins. The first twins are Jonas and Adin (born April 3, 2008), while the second twins are Hudson and Alexis (born in 2010). The family resides in Tenafly, New Jersey.

As a mother of two sets of twins and happily married to her husband, Jackie’s hands are completely full at all times. Worried about raising her children in a privileged home, Jackie is determined that they grow up as strong and self-sufficient individuals.

Jackie has an estimated net worth of $2 million dollars which she has earned through her career as a Tv Personality, newspaper columnist, freelance writer, and former lawyer.

In 2018 Jackie opened up about her battle with anorexia, she talked about how she decided to seek help after she stepped on a scale and decided to take a stand and battle the eating disorder. Her treatment involved excessive exercising and restricted eating. Some years later she was able to maintain a stable weight and good health.

Jackie is one of the cast members of season 11 of The Real Housewives of New Jersey an American reality television series that premiered on February 17, on Bravo. The show focuses on the personal and professional lives of several women residing in the U.S. State of New Jersey.

In this season, when cheating rumors swirl around her marriage, Jackie questions her relationships with the women. Will Goldschneider be able to move forward, or will she decide that her fate lies with a new circle of friends?