A native of Goodrich, Michigan, Genavieve Linkowski is an American singer who is a contestant on season 18 of American Idol.

Linkowski had previously appeared on the show in 2018 and made it to Hollywood after performing her rendition of Jason Mraz’s song “I Won’t Give Up.”

Apart from American Idol, Genavieve has performed on other stages like singing the National Anthem at Jimmy John’s Field in Utica, a Michigan regional softball tournament in summer 2019.

She also sang the National Anthem at Detroit Lions games in September 2018 and December 2019. 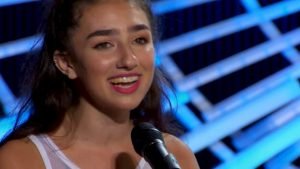 Linkowski is the eldest of 10 siblings. Back in 2018 when she auditioned for American Idol played a big part in her backstory. Her mother had been diagnosed with a heart condition and being the eldest, she was helping take care of the family. Her father is known as Craig Linkowski.

On her return to American Idol season 18, Linkowski revealed the bad news that her sister Corrin had passed away on February 17, 2019, after being in a bad road accident 4 days earlier.

Linkowski and her sister Corrin used to perform together on their Haven Avenue YouTube channel. The two were very close as described by their father; ” Wherever they could do it together, that’s what they wanted to do. Genavieve always wanted Corinn there”.

After the death of Corrin, Genavieve found it hard to perform alone but she has made a comeback and is ready to see where her musical journey takes her.

During her audition on American Idol, Genavieve performed “How Am I Supposed to Live Without You” and the judges were impressed.

Judge Katy Perry said she felt the song through and through while Lionel Richie told her; “Tragedy can either destroy you or make you stronger. “You are no longer singing, you’re performing…it took a lot of guts to come back.”