Born in San Diego, California, United States, Joe Coulombe is an American entrepreneur who was the founder of the grocery store chain Trader Joe’s in 1967.

Coulombe was born on June 3, 1930, in San Diego, California, United States. He was 89 years old at the time of his death.

Coulombe was married to Alice Steere Coulombe. Alice graduated from Stanford University, earning undergraduate and graduate degrees in Education. Her parents taught at the University of Michigan and her father William was a director of the New York Botanical Garden.

Alice is a philanthropist and she served on the Board of Trustees of the Los Angeles Opera. 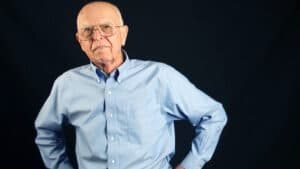 Coulombe attended Stanford University just like his wife, Alice. He graduated with a degree in Economics in 1952. Later in 1954, he earned an MBA from the Stanford Graduate School of Business.

Coulombe began his career at Rexall, a chain of American drugstores. While working there, he was asked in 1958, to test the launch of Pronto Markets, a store brand to compete against 7-Eleven. He ran six Pronto Markets in the Los Angeles area. Later on, Raxell asked him to close them down but Coulombe decided to buy them out instead.

In 1967, after 10 years of refining his strategy in a competitive environment, he renamed his venture from Pronto Markets to Trader Joe’s in Pasadena.

Coulombe led the chain to success and eventually sold it in 1979 to German billionaire Theo Albrecht. He, however, continued to be the chain’s chief executive until 1988 when he retired.

Coulombe served on the Boards of Directors of Cost Plus and True Religion Apparel.

Trader Joe is an American chain of grocery stores headquartered in Monrovia, California. By the year 2015 Trader Joe was a competitor in “fresh format” grocery stores in the United States and by November 2019, it had over 503 stores nationwide in 42 states and Washington, D.C.

Coulombe’s net worth is under review. We will provide the information as soon as it is available.

Coulombe died on February 28, 2020, at the age of 89 years, at his home after a long illness, according to his son Joseph.