Born in the Philippines, Rock M. Sakura is a Filipno drag performer who is a contestant on season 12 of RuPaul’s Drag Race.

Sakura got her stage name from her love of anime. Sakura means cherry blossom in Japanese and also references her frequent use of pink wigs.

Sakura describes herself as painfully shy while growing up. Her refuge was in Japanese anime and manga, Saturday morning cartoons and performing in school musicals. 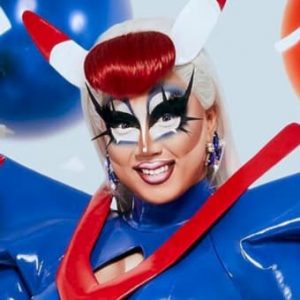 Sakura was born to a Vietnamese immigrant father and Filipina immigrant mother, whom she say has  “some Chinese and Japanese thrown in there too.” While growing up, of her parents struggled with substance abuse but her mother is sober now.

When Sakura started performing in drag, she was in a relationship. However, her then-boyfriend was supportive of her drag career and he forbade drag in the home they shared. This would force Sakura to put her makeup and drag on in public parks, fast-food restaurants, and restrooms.

Eventually, Sakura broke up with him and moved to San Francisco in 2018 to pursue drag full time. In San Francisco, she found like-minded young performers.

Sakura is amongst the 13 contestants on season 12 of RuPaul’s Drag Race. She is the first queen from the San Francisco Bay Area since Honey Mahogany in Season 5 and is also the first Filipino to be cast on the show since Vivienne Pinay in Season 5.

“Through the audition process they look for charisma, uniqueness, nerve, and talent,” Sakura says. “In my case, I’m very charismatic, which makes me a good spokesperson for my city. They want people who are embodiments of where they come from with big personalities who can shine on the giant stage that is national television.” Sakura said during an interview.

She believes one of the reasons she was cast was because she didn’t go into the process “already defeated” by the idea that a San Francisco performer wouldn’t be cast.

Some of her memorable quotes were during “Mett The Queens,” when she introduced herself saying; “Hi! I’m Rock M. Sakura, I’m 28 years old, and I’m from San Francisco, California, and I’m your anime J-pop manga queen !”