April Marie a native of California, is a reality star appearing on the Netflix show The Ultimatum: Marry Or Move On. The show premiered on April 6, 2022, and is hosted by Nick and Vanessa Lachey. April has just given her boyfriend of two years Jake Cunningham an ultimatum to either marry her or break up with her.

Marie is 23 years old born in 1999. She was born in California, United States.

April stands at an estimated height of 5 feet 1 inch. She is of moderate weight. She has dark brown eyes and light brown hair. Further details about her body measurements will be updated.

Marie was born and raised in California. She was born to her parents Gary Melohn and Zenny Melohn. Her parents tied the knot on September 1, 1991. They are originally from Stout, Iowa, and currently live in National City. Her father was born to Sharon Melohn and Ted Melohn.

April and Jake started dating on September 18, 2019. The two have dated for two years now. Marie is now ready to settle down and start a family, however, Jakes feel different. He has just returned from a five-year of service in the military, therefore, he wants to travel and also improve his financial status.

April gave Jake an ultimatum despite all that. He had to marry her or break off things with her. The couple split and coupled up with other people from the cast. April connected with Colby and on the other side, Jake connected with Rae Willims. 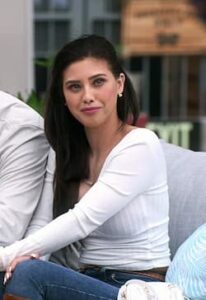 Are April Marie And Jake Cunningham Still Together

April and Jake split up and got into the dating scene, except they were dating their cast members. After three weeks, the couple reunited. It was, however, not as it used to be.  The two regretted their actions and even remembered why they first joined the show. After their split and re-union, it is hard to determine if the two are really together or not. They no longer follow each other on Instagram.

Jake was reportedly against the idea of joining the cast of The Ultimatum. He was, however, persuaded by April to join and he agreed. The two joined the show with hopes of solving the issues in their relationship.

The show features six couples including; Colby & Madlyn, Shanique & Randall, Rae & Zae, Nate & Lauren, and Alexis & Hunter. The couples walk on the with one of them ready to settle and the other not so ready for a commitment.

Marie is a model, social media influencer, and pageant winner. In 2014, she won Miss Florida Top Model. In addition, she has worked with a number of Florida-based clothing brands like; Earthbound and FloGrown. Her favorite model is Devon Aoki.

Marie’s net worth is currently under review and will be updated soon.