Jake Cunningham a native of Texas is a reality tv star appearing on the Netflix show The Ultimatum: Marry or Move On. The show premiered on April 6, 2022. The show is hosted by Vanessa and Nick Lachey.

He is in a relationship with April Melohn. The two started dating back in 2019. After two years of dating, April has given Jake an ultimatum to either marry her or break up.

Jake stands at an estimated height of 6 feet 1 inch. He is of moderate weight. His eyes are green in color paired well with his black colored hair.

Cunningham and April Lelohn started dating on September 18, 2019. They have been together for two years.  April is now ready to settle down and have a baby with Jake, however, he is not entirely on the idea of settling down at the moment.

Jake justified his decision by stating that he had just returned from a 5-year service in the military, therefore, he wanted to travel and become more financial stability before committing to his girlfriend April. Despite that, he was given an ultimatum to either marry April or break up. 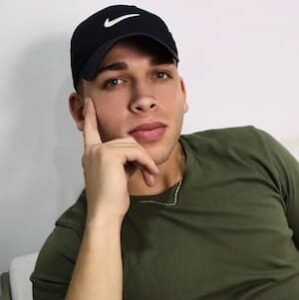 Is Jake Cunningham Still Together With April Melohn

Cunningham and April’s relationship seems to be a little rocky compared to when they first joined the show. After two years of dating April finally gave Jake an Ultimatum to either marry her or break up. The two, however, decided to break up and started dating other cast members.

Jake connected with Rae Williams. The two shared most things about each other including a few kisses. April on the side coupled up with Colby. Jake and April later reunited, however, it was not as it used to be.

The two no longer follow each other on Instagram. They have also not posted any new photos of them together, indicating that they might not be in a relationship anymore. The nature of their relationship is yet to be confirmed.

Cunningham was against the idea of joining the cast of The Ultimatum. He was, however, persuaded by April to join and he agreed. The two joined the show with hopes of solving the issues in their relationship.

The show features six couples including; Colby & Madlyn, Shanique & Randall, Rae & Zae, Nate & Lauren, and Alexis & Hunter. The couples walk on the with one of them ready to settle and the other not so ready for a commitment.

Cunningham served in the military for 5 years. He recently just came back. He joined the United States Marine Corps as an Infantry Team Leader in 2015. After retiring from the military, he became a sales specialist at Leaf Filter Gutter Protection.

Cunningham has not disclosed information about his finances, therefore, his net worth is still under review.