Vanessa Joy Lachey a native of Angeles City, Philippines is an American actress, beauty pageant titleholder, fashion model, and tv host. Lachey was the 1998 Miss Teen USA. She was the New York-based correspondent of Entertainment Tonight from 2005 to 2021. She also hosted Total Request Live on MTV. In September 2021, she was cast to play the role of Janet Tennant in the CBS spinoff NCIS: Hawai’i.

Vanessa was born in Angeles City, Philippines at the 13th Air Force Regional Medical Center at Clark Air Base. She was born to her father Vincent Charles Minnillo originally from Cleveland, Ohio, and is of Italian and Irish descent. Her mother Helen Ramos Bercero is a Philippine from Manila. Her parents separated in 1983 and divorced in 1986.

They later both remarried. Vanessa has an older adopted brother called Vincent. Because of the nature of her father’s job, they lived in Washington, California, Nevada, Florida, Germany, and Japan. They also lived in Turkey with their mother and stepfather. They later moved in with their father in Charleston, South Carolina.

Vanessa is happily married to her husband singer Nick Lachey. The two started dating in 2006. Nick had just divorced Jessica Simpson in June 2006. Nick and Vanessa got engaged in November 2010. They got married on July 15, 2011, at Sir Richard Branson’s private Necker Island in the British Virgin Islands. The couple has been blessed with three children Camden John, Brookelyn Elizabeth, and Phoenix Robert. 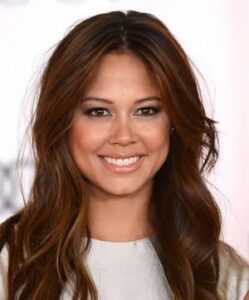 Lachey and her husband Nick Lachey have three children; Camden John born in 2012, Brookelyn Elizabeth born in 2015, and Phoenix Robert born in 2016.

In September 2021, she was cast to play the role of Jane Tennant in the CBS spinoff NCIS: Hawai’i. Her character is the first female Special Agent in charge of the NCIS: Pearl. The tv show is the fourth series in the NCIS franchise. Vanessa guest-starred as carmen Chao in NBC’s sitcom 30 Rock.

She also played the role of Tracy in the NBC sitcom Truth Be Told. Vanessa took part in the 25th season of Dancing With The Stars. Her dance partner was professional dancer Maksim Chmerkovskiy. Vaness started her career in the beauty pageant. She was crowned Miss South Carolina Teen USA.

In 1998, she won the Miss Teen USA title. She was named the pageant’s Miss Congeniality. In 2003, she became the host of MTV’s The Morning After and Total Request Live. She was the New York-based correspondent of Entertainment Tonight from 2005 to 2021.

Vanessa launched her makeup line with Flirt! Cosmetics in 2007. It debuted at Kohl’s department stores. She has also appeared on various magazine covers like; Maxim, Vegas, Shape, Parents, People, and Lucky.

Vanessa played small roles in various television shows like; That’s Life, City Girls, 30 Rock, The Bold and the Beautiful, Psych, Hawaii Five-O, Maybe It’s Me, and How I Met Your Mother. She played the role of Amy in the 2008 parody film Disaster Movie.

Vanessa and her husband are the hosts of the new Netflix reality tv show The Ultimatum: Marry or Move On. The show premiered on April 6, 2022, and features six couples. Each couple has a partner that is ready for marriage while the other is not, therefore, he or she gives an ultimatum for them to get married or break up.

Lachey has an estimated net worth of $25 million.