A native of Compton, California, Anthony Anderson is an American actor, comedian, and game show host.

He is best known for starring in his own short-lived sitcom, All About the Andersons, as well as the ABC sitcom black•ish and the Fox sitcom The Bernie Mac Show during its fifth and final season.

Anderson was born and raised by his parents Doris (mother) and Sterling Bowman (stepfather). His mother was a telephone operator and actress while his stepfather was a native of Little Rock, Arkansas, who moved to Los Angeles to work in the steel mill industry before opening a chain of three clothing stores.

He has a half-brother named Derrick Bowman and his brother Sterling died in 2002. 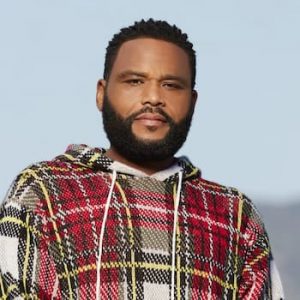 Anderson has been married to his wife Alvina since 11, September 1999. They have two children, Kyra and Nathan. Nathan starred as Tahj in the Netflix sitcom Richie Rich.

Anderson, Laurence Fishburne, and Tracee Ellis Ross star in and executive produce the hit ABC comedy Black-ish. For this role, he received a Primetime Emmy nomination for Outstanding Lead Actor in a Comedy Series.

In 2008, Anderson joined the cast of the long-running NBC crime drama Law & Order: Special Victims Unit. He has also appeared in Fox’s K-Ville (as one of the main characters) and Fox’s cable channel FX’s The Shield.

Anderson has worked as an actor for several years, often in comedic roles. Kangaroo Jack, one of his first films as a leading actor, My Baby’s Daddy, Hustle & Flow, Agent Cody Banks 2: Destination London, and King’s Ransom, his only starring role to date, are among his most notable feature films. Anderson played a minor role in Martin Scorsese’s Academy Award-winning film The Departed.

In addition, he has appeared in Scary Movie 3 and Scary Movie 4 as a supporting character. He was supposed to return in Scary Movie 5 alongside Regina Hall and Kevin Hart, but the script and filming plans changed. Also, he was cast in a minor role in Scream 4 in June 2010.

Anderson has an estimated net worth of $25 Million.