A native of Waco, Texas, Aaron Konzelman is an American singer who became well known as a contestant on season 20 of The Voice.

Konzelman is a self-proclaimed jack-of-all-trades and has worked various jobs, from teaching martial arts to creating essential oils for men’s beards.

Konzelman’s parents ran a Christian music studio while he was growing up. At the moment, there is no more information available about his parents.

Konzelman is married to his wife Amanda. He and Amanda met in college where he studied audio engineering. They make up the duo ‘The Union Revival’. 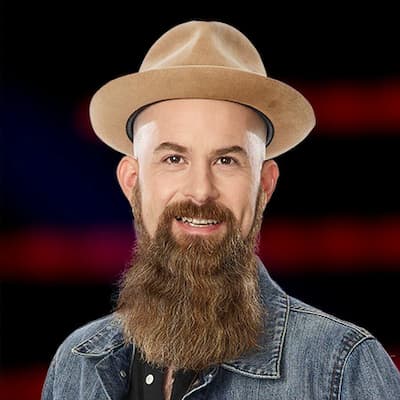 The couple has two children together. They have moved 11 times over the past 17 years, “always immersing themselves in the local music scene wherever they go. ”

Konzelman is a contestant on season 20 of NBC’s singing competition show, The Voice. During his blind auditions, he sang “Ordinary World,” by Duran Duran. He received two chair turns from Blake and John.

“I loved that you went for the high notes. That was awesome and ballsy and I’m into it, ” Kelly Clarkson complimented.

“My button has a little bit of a delay on it. They’ve been working on it all day,” said Blake Shelton trying to explain why he wasn’t the first to turn.

John Legend dubbed that performance ” the combination of being raspy and angelic at the same time.”

Konzelman chose Blake Shelton as his coach through his Voice journey.

Konzelman and his wife Amanda make a singing duo known as “The Union Revival.” According to their website, the couple ” love people, authenticity, and telling the story of the struggles and victories that are common to all of us. We are all on this journey trying to find meaning, love, and purpose.”

“We love finding those stories as we meet people on our journey, and share our story with them. 19 years of writing, gigging, burning up the roads into the early morning, being rich, being broke, having plenty, and having nothing, married for eighteen years and moving 11 times”