A native of Oak Ridge, Tennessee, Tee Higgins is an  American football wide receiver for the Cincinnati Bengals of the National Football League (NFL).

Higgins played college football at Clemson. He had originally committed to the University of Tennessee but eventually changed to Clemson university. 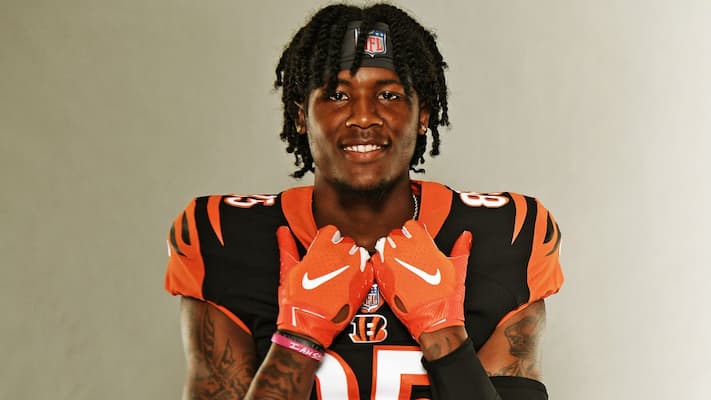 Later in 2018, during his sophomore season, he played as a starter. Higgins had three receptions for 81 yards in the 44–16 victory over Alabama, during the  College Football Playoff National Championship. He finished with 59 receptions for 936 receiving yards and 12 receiving touchdowns.

During his junior year, Tee had 1,167 receiving yards and 13 touchdowns as his team finished with a 14–1 record. They made it to the National Championship, which Clemson lost to LSU by a score of 42–25.  He had a 36-yard rushing touchdown and caught 3 passes for 52 yards in the game. He decided to forgo his final year of eligibility and declare for the 2020 NFL Draft.

He made his NFL debut in Week 1 of the 2020 season against the Los Angeles Chargers. Higgins recorded his first three professional receptions for 35 yards against the Cleveland Browns in week 2.

Higgins’ finished his rookie season with 67 receptions for 908 yards and six receiving touchdowns. His 67 catches tied a Bengals rookie record set by Cris Collinsworth in 1981; a record which would eventually be broken the following year by rookie wide receiver Ja’Marr Chase, with 81 receptions.

On January 2, 2023, during the Bengals’ Week 17 game against the Buffalo Bills. He made a catch and was tackled by Damar Hamlin after which Hamlin collapsed to the ground. First responders initiated CPR and administered defibrillation on the field after which they rushed to the hospital.

Higgins has an estimated net worth of around $1.5 million.