Stacy Keach is an American actor and narrator. He is best known for mainly playing dramatic roles. His most notable role was as Mike Hammer. It is a fictional character created by Mickey Spillane.

He played this role in a number of television films and television series. Keach earned a Golden Globe Award for this role. As a narrator, he has performed for several programs including CNBC’S American Greed and various educational television programs.

Keach stands at an average height of 6 feet. There is no further information about his body measurements. 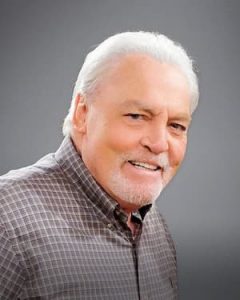 Keach was born Walter Stacy Keach Jr. in Savannah, Georgia. He was born to his parents Mary Cain and Stacy Keach Sr. His mother was an actress and his father a theater director, drama teacher, and actor. His brother James Keach is also an actor and television director. Keach was born with a cleft lip and had to go through several operations as a child.

Keach attended Van Nuys High School. After graduating from high school, he enrolled at the University of California, Berkeley. He graduated in 1963 with two bachelors of arts degrees in English and Dramatic Art. He earned his Master of Fine Arts degree from Yale School of Drama. Keach was a Fulbright Scholar at the London Academy of Music and Dramatic.

Keach is a theater, film, and television actor. In 1966 he played the title role in MacBird!, an off-broadway anti-war satire. In 1967, he joined the cast of The niggerlovers alongside Morgan Freeman. He has also performed in a number of plays including We Bombed in New Haven, and Indians as Buffalo Bill.

In addition to his theater credits, he has performed as the lead role in Shakespeare’s King Lear, Merlin in Camelot, and Hamlet. Keach played the role of Richard M. Nixon in Frost/Nixon. Stacy is a founding member of L. A Theater works which he has performed for in several productions.

In 2017, Keach was scheduled to play Ernest Hemingway in Jim McGrath’s play Pamplona at the Goodman Theatre. However, he suffered a mild heart attack on opening night. This leads to the show’s whole play being canceled. Keach reprised his role after one year in 2018.

Throughout his career, Keach has been able to feature in numerous films and TV shows including, The New Centurions, Fat City, The Ninth Configuration, and Jesus of Nazareth. In 1978, he co-starred alongside Ursala Andress in The Mountain of the Cannibal God.

Keach made his television debut in 1975 playing the role of Lieutenant Ben Logan in Caribe. His other notable television roles were Jonas Steele in CBS miniseries, The Blue and the Gray, and Ken Titus in Titus. He voiced several episodes from The Simpsons including Hungry, Hungry Homer”, “Old Yeller-Belly”, “Marge and Homer Turn a Couple Play”.

Keach has narrated for several programs including Nova, National Geographic, Haunted Lives: True Ghost Stories. He was also the narrator for World’s Most Amazing Videos from 1999. Keach is currently hosting the Twilight Zone radio series and CNBC’s American Greed. He became the official voice of The Opie and Anthony Channel on SiriusXM Satellite Radio.

Stacy received a star on the Hollywood Walk of Fame in 2019. He has won numerous awards including Obie Awards, Drama Desk Awards, and Vernon Rice Awards. He was inducted into the American Theater Hall of Fame in 2015.

Keach has been married to his wife Malgosia Tomassi since 1986. He met his wife on the set of Mickey Spillane’s Mike Hammer. Malgortaza is a former Polish actress and fashion model currently working as an interior designer. Keach and his wife have two children, Shannon Keach and Karolina Keach. In 2015, Keach gained Polish Citizenship.

Keach has two children together with his wife Malgosia Tomassi. His children are, Karolina Keach and his son Shannon Keach.

Keach has an estimated net worth of $8 million. He has been able to build his wealth from his successful career as an actor and narrator. His most notable role was as Mike Hammer, a fictional character created by Mickey Spillane