Zak Ahmed better known by his online name Skeppy is an American YouTube gamer. He is famous for his Minecraft challenge videos on his YouTube Channel. Over 100 people take part in his challenge videos with the last one standing getting a prize in the range of $1,000 – $10, 000.

Prior to him making gaming and challenge videos, Zak made videos trolling players, his friends, and staff in Minecraft. He started his online career in 2015.

Zak was born on the 17th of January, 2000 in Columbus, Ohio. The 21-year-old celebrates his birthday every year surrounded by close friends and family.

Zak stands at a height of 6 feet 2 inches. The 21-year-old has maintained a body weight of 58kgs o128 lbs. He has black hair that goes well with his black-colored eyes. 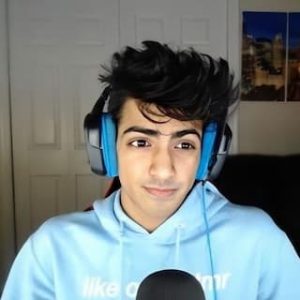 Zak went to elementary school in Columbus, Ohio. They lived in Toronto for a few years where he went had his middle school education. At the age of 15, Zak went to high school in Dubai. He also did online schooling in Florida.

Ahmed was born in Columbus to his parents Jen And Naz. His parents moved to Florida a year after his birth where he grew up. In a Q/A Zak stated that as a child, his family traveled a lot. He has lived in Toronto for a few years. He also added that he has visited Las Vegas, New York City, and Seattle. There is no further information about his parents and siblings if he has any.

Zak started his gaming career in 2015.  Hic content mostly focuses on challenge videos in Minecraft. In these videos, he gives out challenges to over 100 players. The last player standing usually gets a prize in the range of $1, 000 – $10, 000. Prior to his current content, Zak made videos trolling players, his friends, and staff on Minecraft. He also created videos with Technoblade who’s also a YouTuber, that he posted on his channel.

In his Minecraft videos, Zak mostly collaborates with his fellow Minecraft YouTubers including BadBoyHalo, Spivey, 09sharkboy, and JustVurb. In 2020, Zak got to participate in Noxcrew’s and Dangthatsalongname’s MC Championship event. This event includes Youtubers and Streamers coming together to play a wide variety of minigames.

Ahmed has a number of channels; Skep, Zak, SkeppyClips, Skeppee, and SkeppysLab. He posts different but similar content on each channel. He also had a joint YouTube channel with some of his friends in 2013 called TheRoyalPvPervs. He had another channel with BadBoyHalo and a6d called The Trio.

After the three split, he changed the YouTube channel’s name to SkeppyLabs and privated all their videos. Zak owns a Minecraft Server known as InvadedLands. His Server contains other different sub servers; sub-servers, Survival, Soup, Skyblock, UHC, and KitPvP.KitPvP is his most popular sub-server.

Zak is very private about his personal life, hence information about his dating life is still not disclosed. This information will be updated as soon as it is available.

Zak has an estimated net worth of $0.2 million as of 2021. His main source of income comes from his YouTube gaming channels. His channels have had a massive growth of 4.1 million subscribers and over 1.2 billion views.