Nadia Nakai Kandava is a South African-Zimbabwean rapper, television personality, and songwriter. She is best known for her song ‘Naaa Mean‘. Nakai released her studio album Nadia Naked on the 28th of June 2019.

Nadia stands at an estimated height of 5 feet 6 inches (1.68 meters) and weighs about 59 Kg (130 lbs). She has black hair and black eyes. Further details about her body measurements are still under review and will be updated.

Nakai was born in South Africa and raised in Zimbabwe. She was born to a Zimbabwean father and a South African mother. Nakai holds a South African nationality. As of her education, she went to Monash University in Johannesburg where she studied Marketing, Communication, and Media Studies.

Nakai was previously in a relationship with United States musician Vic Mensa. The two met at a video shooting of the song Practice. They proceeded to have a long-distance relationship. Unfortunately, the couple did not last. During an interview with Drink Or Tell The Truth, Nadia disclosed that they had broken up. 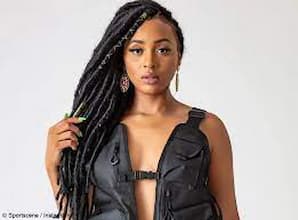 Nakai is one of the famous cast members appearing in the reality tv show Young Famous And African on Netflix. The show premiered on March 18, 2022. It follows various artists and tv show personalities across Africa including; Diamond Platnumz, Zari Hassan, Khanyi Mbau, Andile Ncube, and Jeremiah Ogbodo.

Nakai made her television debut appearing on the e.tv hip hop show Shiz Niz. She became the first female to win a Mixtape 101 competition. Nakai released her debut single “Like Me” in 2013. She later released her second single “Whatever” followed by “Saka Wena”.

Nakai was the recipient of the most stylish performing artist of 2020 at the 2020 SA Style Awards. In 2021, she became the host of Gen-Z South Africa television show. In addition, she was nominated for Artist of the Decade at the South African Hip Hop Awards.