He has also been featured on Food Feuds as well as on The Best Thing I Ever Ate. Symon is also featured in Cook Like an Iron Chef on the Cooking Channel and The Chew on ABC. Additionally, he has made numerous contributions to periodicals such as Bon Appétit, Esquire, Food Arts, Gourmet, Saveur and O, The Oprah Magazine.

Michael is the chef and owner of a number of restaurants in the Greater Cleveland area, including his flagship Lola, Mabel’s BBQ, and burger franchise BSpot. He is credited with helping to “save” the restaurant scene in Downtown Cleveland.

He also owns Michael Symon’s Roast (also known as Roast) in Detroit, Michigan. On May 6, 2017, he opened Angeline (named after his mother Angel) at the Borgata in Atlantic City, New Jersey. Symon describes his cooking as “meat-centric. 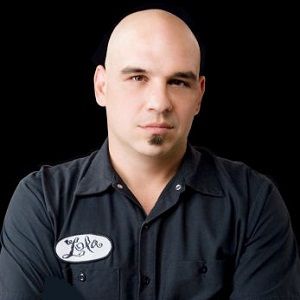 Although Symon was born in Cleveland, Ohio, he was brought up in North Olmsted, Ohio in a Greek and Sicilian family. He is the loving son of Angel Symon, his mother, and Dennis Symon, his father. Additionally, he is the brother of Nikki Symon.

Michael is a married man. He is the loving husband to Liz Symon, who has also been a collaborator on his restaurants. He is also a father to Kyle, his adult son. At the time of Michael’s and Liz’s wedding, Kyle was two years old.

Symon was raised in North Olmsted, Ohio where he attended St. Richard School in North Olmsted and St. Edward High School in Lakewood, graduating in 1987. Michael took a part-time job at Geppetto’s Pizza and Ribs on Warren Rd. as a cook. In 1990, he graduated from the Culinary Institute of America in Hyde Park, New York.

Prior to branching out and having his own restaurants, Symon worked for many of Cleveland’s top restaurants like player’s, Piccolo Mondo, Giovanni’s, and The Caxton Cafe. In 1997, he opened his first restaurant Lola with his then-fiancé and now wife, Liz Shanahan. The opening of it was a success and remodeled the area, making it lively. It was named one of America’s Best Restaurants in Gourmet magazine in its October 2000 issue. Later in 2005, Symon converted Lola into Lolita and reopened it in downtown Cleveland. In April 2006, Symon opened a third restaurant named Parea in New York City.

Symon was featured in fellow Clevelander Michael Ruhlman’s 2001 book, The Soul of a Chef: The Journey Toward Perfection. The second part of the three-part book focuses on Symon’s quest for culinary perfection. Michael collaborated with Ruhlman to write his first cookbook Michael Symon’s Live to Cook: Recipes and Techniques to Rock Your Kitchen in 2009. The foreword is written by fellow Iron Chef Bobby Flay. It was published by Clarkson Potter and was released on November 3rd, 2009.

The Chew crew began releasing seasonal e-book cookbooks with The Chew: Fall Flavors: More than 20 Seasonal Recipes from The Chew Kitchen, published by Hyperion Books, which is a unit of ABC parent The Walt Disney Company beginning in September 2012.

The cookbook features 100 easy recipes for every night of the week provided by Symon along with his co-hosts. In this cookbook, Symon provides quick and easy recipes for chicken marsala, angel hair Caprese, and many others. He also shares tips on how to cook scallops restaurant-style. Other cookbooks include 5 in 5: 5 Fresh Ingredients + 5 Minutes = 120 Fantastic Dinners (2013), 5 in 5: 5 for Every Season (2015), Michael Symon’s Playing with Fire (2018), and Fix It with Food (2019). These were all co-authored by Douglas Trattner.

Michael Symon Net Worth and Salary

Over the years, Michael has made a great fortune from his career. He has an estimated net worth of $8 million. However, his annual earnings are currently under review and will be updated as soon as it has been made publicly available.