The show mainly follows young real estate agents in Los Angeles as they sell high-end homes. Flagg has been recognized by The Wall Street Journal as one of the top-ranked agents in California. Additionally, he is known nationally for sales volume and as a top 25 real estate agent by The Hollywood Reporter.

Josh is the author of two books. His first book which was published in 2009 was titled A Simple Girl: Stories My Grandmother Told Me. In addition in 2011, he published his second book titled Million Dollar Agent: Brokering the Dream. He was featured on Forbes’ 30 Under 30 in 2012 as a top record-breaking real estate agent.

Joshua Daniel Flagg was born on August 20th, 1985 in Los Angeles, California, United States. He is 36 years old as of 2021. Additionally, he celebrates his birthday on August 20th every year.

Flagg measures a standing height of 5 feet 8 inches tall which is equivalent to 1.73 meters tall. However, his weight as well as his other body measurements are currently under review and will be updated as soon as it has been made publicly available. 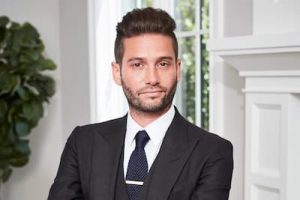 Born in Los Angeles, California, Josh is the son of Michael Flagg, his father, and Cindy Platt Flagg, his mother. Moreover, he is the grandson of Philanthropist, electronics industry executive, and Jewish leader Herman Platt and great-grandson of Benjamin Platt who is the founder and owner of the nationwide Platt Music Corporation chain of stores.

On his father’s side, Flagg is the grandson of American (Romanian-born) fashion industry executive and designer Edith Flagg, best known as one of the first designers to import polyester as a fashion textile to the United States. Edith was later known for her reoccurring role on Million Dollar Listing Los Angeles alongside her grandson.

Flagg is openly gay. He came out in March 2011. In July 2016, he proposed to his fiancé, Bobby Boyd, during a flash mob at the Four Seasons Hotel George V. The couple got married on September 10, 2017, at the Beverly Hills Hotel, LA. Flagg and his husband own and live in a house in the flats of Beverly Hills.

Josh was brought up in Los Angeles where he attended Brentwood School, a private school in the Brentwood section of Los Angeles. In 2003, Flagg left Brentwood and attended Beverly Hills High School where he graduated the following year.

The American-born real estate agent, Flagg, began his career at the early age of 18. At that age, he started making residential sales in high-end neighborhoods such as Beverly Hills and the Sunset Strip. Flagg began his career while still in high school under real estate broker John Bruce Nelson’s firm in Bel Air.

He later did a brief stint at the Coldwell Banker Beverly Hills East office in 2007. Over the years in his career as a real estate agent, Josh has made many record sales, including the highest sale in the history of Brentwood Park and a $25 million residential sale in Beverly Hills.

Additionally, he has been the listing agent for reputable estates including Merv Griffin’s Bel Air estate and the Dorothy Chandler Estate in Hancock Park. Moreover, he has sold homes to various celebrities including Adam Levine, Steve Aoki, Shonda Rhymes, and Tom Ford.

In 2009, Flagg started working at Keller Williams Westside in Los Angeles, California, where he started “Josh Flagg Estates.” According to Forbes, Josh has sold over $1 billion worth of property during his career. He later began working with Rodeo Realty

In 2016, Josh along with two other agents, Madison Hildebrand and Chad Rogers was picked to star in a reality TV series following their career in the real estate industry. They started filming for the show, Million Dollar Listing Los Angeles, and it aired on Bravo in August 2006. The show continued with the original cast until Season 4 when Josh Altman co-starred along with Flagg and Hildebrand.

After Season 6 concluded in 2013, Hildebrand left the show, making Flagg the only remaining original cast member. Flagg and Altman were joined by James Harris and David Parnes for Season 7. The series aired its 10th Season in 2017, with Flagg, Harris, Hildebrand, and Parnes returning and realtor Tracy Maltas joining its cast.

Josh Flagg Net Worth and Salary