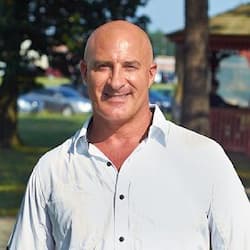 Jim Cantore born James D.Cantore is an American journalist. He is a certified broadcast meteorologist working for The weather channel in Atlanta, Georgia. He joined the weather station in July 1986.

Cantore was born on the 16th of February 1964. The 57-year-old was born in Beacon Falls, Connecticut. He celebrates his birthday surrounded by family and friends.

Cantore stands at an average height of 5 feet 7 inches. He is of average body size. There are no further details about his body measurements or eye color. These details will be updated as soon as they are available.

Cantore was born as James D. Cantore in Beacon Falls, Connecticut United States. He has not yet disclosed any information about his parents and siblings if he has any. Cantore prefers to keep his family information away from the media hence it not being available.

Cantore is a certified broadcast meteorologist working for The Weather Channel. He the weather station right after graduating from college in July 1986. Since joining The Weather Channel, Cantore has gained immense popularity for his ability to fluently report on weather news in a way that an average viewer can understand.

When he first joined The Weather Channel, he was responsible for developing the Fall Foliage Forecast. He also reported for multiple events such as the Space Shuttle Discovery launch, and NFL games. Aside from his reporting duties at The Weather Channel, he is also a narrator on the series Storm Stories. In addition, he narrates Local On 8s.

Cantore was featured at the beginning of the  ECHL’s Stockton Thunder entrance video. Cantore has occasionally filled in for Al Roker, a fellow journalist, and meteorologist on The Today Show. He is a member of both the National Weather Association and the American Meteorological Society and holds the AMS Television Seal of Approval. He is a receiver of the NOAA-David S. Johnson Award in 2003.

Cantore was married to his ex-wife Tamra Zin for 19 years. They got married in 1990 and got divorced in 2009. The two have two children Christina and Ben Cantore.

Cantore has an estimated net worth of $4.5 million. He has earned all his wealth from his career as a meteorologist working for The Weather Channel.