A native of Oshimili North, Nigeria, Evelyn Joshua is the wife of the late T. B. Joshua, a Nigerian pastor, televangelist, and philanthropist.

Her husband was the leader and founder of The Synagogue, Church of All Nations (SCOAN); a Christian megachurch that runs the Emmanuel TV television station from Lagos.

Joshua is the daughter of Mr. and Mrs. Nicholas Akabude. She was born a twin but her twin brother passed on. At the moment, there is no more information about her parents. 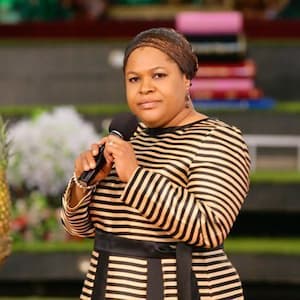 Evelyn was married to her husband T. B. Joshua, leader and founder of The Synagogue, Church of All Nations (SCOAN). She has revealed that her husband proposed after 45 minutes of their first meeting.

After Joshua proposed, Evelyn agreed to marry him and the couple got married months later after their engagement. They remained together until, her husband’s death on June 5, 2021.

Joshua died on June 5, 2021, after one of his evening services in Lagos, Nigeria. He was 57 years old at the time of his death. He leaves behind a wife and three children.

Joshua and his wife Evelyn had three children together. Two of their children are Promise and Serah Joshua. Their daughter Serah is married to Brian Moshi; a Tanzanian man.

The couple tied the knot on Saturday, May 8, 2021, at a Catholic Church located at Unga Ltd in Arusha. They had first gotten married in Nigeria at the Pentecostal Church and later in Dubai, United Arab Emirates (UAE).

She and her husband have an estimated net worth of around $15 million.