Jesseca appears to be of short stature. The beauty mogul stands at a height of 5 feet 3 inches (160 cm). She weighs 62 kg. On to her body measurements. She measures 37-29-42 inches. In addition to her beautiful features, she has dark brown eyes. 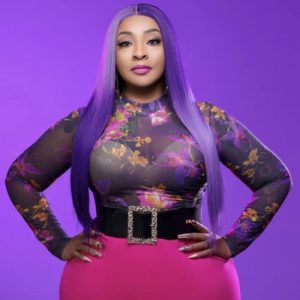 Dupart is currently in a relationship with musician Da Brat. Da Brat announced the news of their relationship in March 2020. The beautiful couple recently landed their own reality show called Brat Loves Judy on WEtv. The reality show premiered on August 5, 2021.

Jesseca has three children; two sons Byron Jr. and Jay, and a daughter named Deja Dupart. She had her first child at the age of 15, her second child at 17, and her last-born child at 19 years old. Jesseca is also a grandmother. Her daughter Deja Dupart gave birth to her grandchild Kenzi Ann Dupart on March 28, 2020.

Growing up, Jesseca always wanted to be to cosmetologist. However, she had not finished her education and therefore did not have the qualifications. She was hired as a hairstylist before starting her own business. Through hard work, she was able to save enough money to open her own hair studio.

Her brand has been endorsed by a number of celebrities such as DJ ENVY, Trina, Angela Tee, and Monica. Her company has a large Instagram following and a loyal customer base. In 2019, Jesseca was was awarded the Key to the City of New Orleans by the mayor of New Orleans, LaToya Cantrell.