Da Brat born Shawntae Harris, a native of Chicago, Illinois, U.S, is an American rapper. She started her career in 1992 signing with So So Def Records. She released her debut album Funkdafied in 1994. The album sold one million copies. This made her the first female solo rap act to attain a platinum certification and the second after Salt-N-Pepa.

Harris stands at an estimated height of 5 feet 5 inches 4 inches (1.63 meters). She is of average body size. There are no further details about her body measurements. However, these details will be updated as soon as they are available. 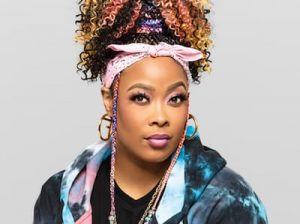 Harris was born and raised in Chicago, Illinois. She was born to her parents David Ray McCoy, a businessman, and her mother Beverly Calloway, a city bus driver. Since her parents never got married, she lived in two households. She partly lived with her mother and grandmother and attended an Apostolic church. She was raised together with her sister LisaRaye McCoy.

Brat is currently in are a relationship with entrepreneur Jesseca Dupart. Jesseca is the founder of Kaleidoscope Hair Products. Brat announced the news of their relationship on March 26, 2020. In March 2020, she had an interview with Variety magazine. She discussed her coming out as a lesbian and why it took her 25 years to come out.

Harris started her music career in 1992 when she won the grand prize in a local rap contest sponsored by Yo! MTV Raps. She then met rap duo Kris Kross who introduced her to their producer Jermaine Dupri. Dupri signed her to his label So So Def. Brat became one of the female “reality-based” rappers.

Her first studio album was Funkdafied released in 1994. The album started at No.11 on the rap albums chart. The album sold one million copies. This made her the first female solo rap act to attain platinum certification. Her single “Funkdafied” peaked at 1 on the rap singles chart and number 6 on the Billboard Hot 100.

Brat released her second full-length album, Anuthatantrum in 1996. In the 1990s, she featured on multiple R&B singers’ albums. She featured Kris Kross on the title track of their album Da Bomb (1993). In 1996, she contributed a rhyme to the hip hop remix of Mariah Carey’s hit, “Always Be My Baby”.

Brat featured on a remix of Destiny’s Child single “Jumpin’, Jumpin'”. In 1999, she appeared alongside Krayzie Bone, on the remix to Mariah Carey’s cover of Brenda K. Starr’s “I Still Believe”. She released her third full-length album Unrestricted in 2000. Two of her singles “That’s What I’m Looking For” and “What Chu Like” peaked at numbers 56 and 26 respectfully.

Her fourth album Limelite, Luv & Niteclubz was released in 2000. In 2005, she featured on the remix of the song “I Think They Like Me,” by Dem Franchize Boyz. Currently, Brat works for the Rickey Smiley Morning Show as a co-host. She has appeared on the tv series The Rap Game and Growing up Hip Hop: Atlanta. She has also appeared on the 4th season of VH1’s The Surreal Life.

Harris has had several altercations with the law. In 2001, she was found guilty of misdemeanor reckless conduct after she had battered a woman with a rum bottle over a VIP seat in an Atlanta nightclub. She was given 1-year of probation, 80 hours of community service, and paid a $1,000 fine.

Brat’s net worth is currently under review but will be updated as soon as it is available.