A native of Manhattan, Jennifer Grey is an American actress known for her roles in the 1980s films Ferris Bueller’s Day Off in 1986 and Dirty Dancing in 1987.

Grey attended Dalton School, a private school in Manhattan where she studied dance and acting, and where she met her best friend, actress Tracy Pollan.

Grey is the daughter of stage and Academy Award-winning screen actor Joel Grey and former actress and singer Jo Wilder. She was born in Manhattan.

Grey is married to actor and director Clark Gregg. The couple got married on July 21, 2001. She has once shared the screen with her husband in the film, ‘The Road To Christmas’ in 2006. The couple has one daughter Stella Gregg who was born on December 3, 2001. 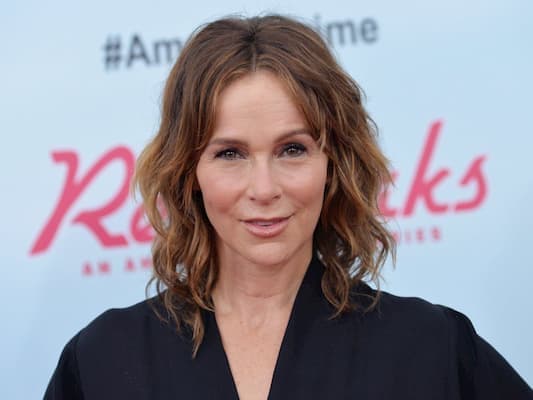 Johnny Depp was in a relationship with the Dirty Dancing star Jennifer Grey around 1989 and the couple was rumored to have been engaged. But then nothing has ever been confirmed. They eventually broke up.

Red Dawn is a film set in an alternate history timeline in which the United States is invaded by the Soviet Union and its Cuban and Nicaraguan allies. However, the onset of World War III is not fully elaborated. . The film follows a group of American high school students who resist the occupation with guerrilla warfare, calling themselves “Wolverines”, after their high school mascot.

House is an American television medical drama that originally ran on the Fox network for eight seasons. From November 16, 2004, to May 21, 2012. The series’ main character is Dr. Gregory House Hugh Laurie, an unconventional, misanthropic medical genius who, despite his dependence on pain medication, leads a team of diagnosticians at the fictional Princeton–Plainsboro Teaching Hospital in New Jersey. Jennifer plays the role of Abbey.

In 2016, news of Jennifer’s death quickly spread causing concern among her fans. The news was later confirmed as a complete hoax.

On August 5, 1987, Jennifer suffered a severe whiplash in a car accident in Enniskillen, Northern Ireland, while vacationing with actor Matthew Broderick; whom she began dating in semi-secrecy during the filming of Ferris Bueller’s Day Off.

The accident occurred when Broderick, at the wheel of a rented BMW, crossed into the wrong lane and collided head-on with a Volvo driven by a local mother and daughter, Margaret Doherty, 63, and Anna Gallagher, 28; who died instantly in the accident. Matthew Broderick was later convicted of careless driving and fined $175.

Jennifer’s spinal cord was compressed and her surgeon placed a titanium plate in her neck to stabilize it.

When undergoing treatment after the accident, her surgeon found a suspicious white spot on her thyroid via MRI. The nodule was cancerous. She underwent two surgeries to treat the illness. She is now cancer-free.

Jennifer had a nose surgery that left her looking different. The first one did not go so well hence she had a second surgery to fix the first one. The nose job left her unrecognizable to friends and family and has been seen as the cause of the end of her career.

In 2012, Jennifer told The Mirror, “I went into the ­operating room a ­celebrity and came out anonymous. It was the nose job from hell. I’ll always be this once-famous actress nobody ­recognizes because of a nose job.”

Jennifer Grey Dancing With The Stars

Grey was a contestant on season eleven of Dancing With the Stars. She partnered with professional dancer Derek Hough and the two won making Derek Hough the first contestant to win the competition three times.

How Old Was Jennifer Grey In Dirty Dancing

Gery was 27 when she played Baby in Dirty Dancing.

Grey has an estimated net worth of around $10 million.