A native of Albuquerque, New Mexico, James Borrego is an American basketball coach who is the head coach of the Charlotte Hornets of the National Basketball Association (NBA).

As a player, Borrego played three seasons with the San Diego Toreros and was named to the West Coast Conference All-Academic Team, during his senior season (2000–01). He began his coaching career with his alma mater, the University of San Diego as an assistant from 2001 to 2003.

Borrego is the son of Lydia Borrego. James and his sister Jessica were raised single-handedly by their mother in Albuquerque, N.M. His mother had a beautician’s license so if someone needed to color their hair, a cut, or a perm and could only be available at odd hours, her home was open for work. 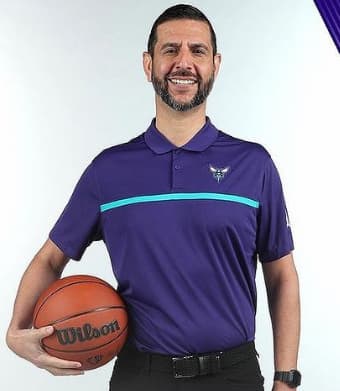 James’ wife is named Megan Borrego. The couple has 3 children; a daughter and two sons.

James was named as the new head coach of the Charlotte Hornets on May 10, 2018. He agreed to a four-year deal with the team. His signing made him the first head coach in the NBA’s 72-year history.

Borrego began his career in professional basketball in 2003 with the San Antonio Spurs where he was an assistant video coordinator in the summer of 2003 and being promoted to assistant coach afterward.

James spent seven seasons with the Spurs and was part of two NBA championship teams in 2005 and 2007 before leaving the team to join former Spurs’ assistant Monty Williams when he took the head coach job with the New Orleans Hornets from 2010 until 2012. He later returned on June 17, 2015, as an assistant coach for Gregg Popovich.

Borrego began his coaching career with his alma mater, the University of San Diego from 2001 to 2003 as an assistant. During his time with San Diego, they captured the West Coast Conference Championship and earned a trip to the NCAA Tournament in the 2002–2003 season.

Kemba Walker is Charlotte’s point guard. He came into the league with a top-tier driving game and shoddy jumper. In his first four years in Charlotte, his 3-point shooting hovered between 30-and 33 percent. According to ESPN’s Zach Lowe, coach James says Kemba Walker is the closest thing comparable to Stephen Curry of the Golden State Warriors.

With hopes building up that Tony Parker may be a Charlotte Hornet, coach James insists that the team is merely borrowing him.

Borrego earns an annual salary of $2 million with Charlotte Hornets as their head coach.

The terms of Borrego’s contract with the Charlotte Hornets remain unknown as of now.

Borrego has an estimated net worth of around $3 million.

Borrego is not on any social media platform.