A native of New Britain, Connecticut, Tom Thibodeau is an American basketball coach who is the head coach for the New York Knicks of the National Basketball Association (NBA).

Tom has served as an assistant coach for the United States men’s national basketball team since 2013. While serving as a defensive coach, Tom helped the Houston Rockets rank among the Top 5 in the league in scoring defense and field goal percentage defense from 2004 to 2007. He also helped his team finish in the league’s Top 10 in team defense 15 times.

He was in 2011, named the NBA Coach of the Year after leading the Bulls to a 62-win season. 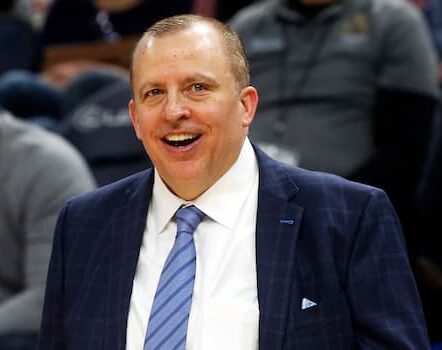 Thibodeau is the son of Thomas J. Thibodeau Sr. and Ann M. Thibodeau. He was born in New Britain, Connecticut, United States. Tom has four other siblings. They are; David Thibodeau, Janet Thibodeau, Dennis Thibodeau and Nancy Thibodeau. Tom’s father died during the 2007-08 NBA season.

Thibodeau has never been married. According to a 2012 article by New York Times, Tom was engaged while he was in graduate school at Salem State but called it off a month or two before the wedding.

Derrick Rose is a basketball player for the Minnesota Timberwolves. When coach Tom was fired by the Timberwolves on 6 January 2019, Derrick was asked if he is still going to perform without coach Tom, and in response, he said, “For everybody that think I’m not going to play the same way, kill yourself, because I believe in myself” Rose told the media.”

His “kill yourself” remarks drew criticism and he ended up offering an apology on Twitter after his session with the media. His apology read, “I messed up by using the slang term “kill yourself” today in response to a question about whether I can continue to perform without coach Thibs. I did not mean it literally and regret using it so I apologize.”

Derrick played for Tom for four seasons in Chicago, winning the MVP in 2010-11. They later reunited when Derrick was signed with the Timberwolves.

Tom was on January 6, 2019, fired by the Timberwolves. According to Adrian Wojnarowski of ESPN, Tom had no idea that he was about to be fired. His players too were surprised. Tom and the Wolves had won five of their past eight games making the timing of the firing very strange.

Thibodeau was hired by the New York Knicks on July 30, 2020, as the team’s head coach. During his first season as the Knicks’ head coach 2020–21, he led the team to their first playoff appearance since the 2012–13 season. Tom was named Coach of the Year for the second time in his career after that season.

Thibodeau signed a 5 year / – contract with the New York Knicks.

Thibodeau has an estimated net worth of around $12 million.