A native of Norwood, New York, Chris Hayes is an American journalist, political commentator, and author who hosts All In with Chris Hayes, on MSNBC.

At Brown University, Chris graduated with a Bachelor of Arts in philosophy and worked with the student theater group Production Workshop.

In July 2010, Chris guest-hosted The Rachel Maddow Show, while Maddow was traveling in Afghanistan and often filled in for Maddow when she was absent.

Hayes has also hosted other MSNBC shows such as The Ed Show, Countdown With Keith Olbermann, and The Last Word with Lawrence O’Donnell. 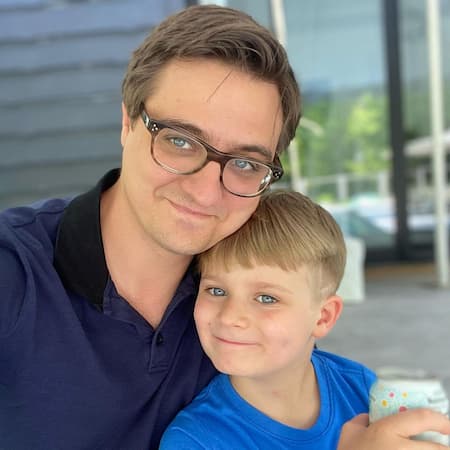 Chris Hayes and his Son

Later, on November 5, 2010, MSNBC announced that Chris would be filling in for Keith Olbermann during Olbermann’s suspension. However, the network later backtracked after finding out that Hayes had also made political contributions on the issue over which Olbermann was being suspended.

Up With Chris Hayes

In August 2011, MSNBC announced that Hayes would be hosting a two-hour morning show that would focus on current issues. The show, Up with Chris Hayes would air on Saturdays and Sundays

On  Memorial Day Weekend, May 27, 2012, Chris commented on air regarding the use of the word “heroism” as applied to American servicemen killed in action.

He stated; “I feel uncomfortable about the word because it seems to me that it is so rhetorically proximate to justifications for more war. And I don’t want to obviously desecrate or disrespect the memory of anyone that’s fallen. And obviously, there are individual circumstances in which there is genuine, tremendous heroism, you know, hail of gunfire, rescuing fellow soldiers, and things like that. But it seems to me that we marshal this word in a way that is problematic. But maybe I’m wrong about that.”

These remarks generated widespread controversy and Chris initially defended his comment by urging people to listen to what he had actually said. He nonetheless, apologized on his blog.

MSNBC All In With Chris Hayes

In March 2013, MSNBC announced that Chris would take over the time slot formerly hosted by Ed Schultz.  He became the youngest host of a prime-time show on any of the country’s major cable news channels.

According to The New York Times, this change was made in the hopes that MSNBC could gain a wider audience than it did with Schultz.

Hayes is married to Kate Shaw, a professor of law at the Yeshiva University Benjamin N. Cardozo School of Law and a Supreme Court contributor for ABC News. She previously worked as a Supreme Court law clerk to Justice John Paul Stevens.

Hayes and Kate got married on July 14, 2007. They first met while attending Brown together. Kate’s father is veteran Chicago reporter Andy Shaw.

No. Chris is not gay. He is married to Kate Shaw and the couple has children together.

Chris Hayes A Colony In A Nation

A colony in a nation is Chris’ second book in which he discusses national conversation on policing and democracy. Hayes contends that the USA has fractured in two: the Colony and the Nation.

All In Chris Hayes Podcast

Hayes’ annual salary at MSNBC is estimated to be around $1 million.

Hayes has an estimated net worth of around $6 million.