Celia Rose Gooding a native of New York, is an American actor and singer. She is best known for her role as Mary Frances “Frankie” Healy in the rock musical Jagged Little Pill. This role earned her a 2021 Grammy Award for Best Musical Theater Album and a nomination for a 2020 Tony Award for Best Actress in a Featured Role in a Musical.

Celia stands at an estimated height of 5 feet 8 inches and is of moderate weight. She has black hair and dark brown eyes.

Celia was born in New York to her mother LaChanze. She is an actress, singer, and dancer. Her father Calvin Gooding died during the September 11th attacks. The actress was only one year old at the time of her father’s death. She has a sister named Zaya.

Celia is Bisexual. The 22-year-old has not disclosed any information about her relationship status. She appears to be currently focused on her career as an actress. Further details will be updated as soon as she discloses them. 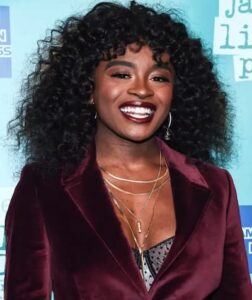 Gooding made her broadway debut after starring in the rock musical Jagged Little Pill playing the role of Mary Frances “Frankie” Healy. The musical premiered on May 5, 2018, at the American Repertory Theater in Cambridge, Massachusetts. This role earned her a 2021 Grammy Award for Best Musical Theater Album and a nomination for a 2020 Tony Award for Best Actress in a Featured Role in a Musical.

Celia is set to play the role of Nyota Uhura in the upcoming Paramount+ original series Star Trek: Strange New Worlds. The tv series is a spin-off from Star Trek: Discovery and a prequel to Star Trek: The Original Series. It was created by Akiva Goldsman, Alex Kurtzman, and Jenny Lumet. This season of Star Trek will make its premiere on May 5, 2022.