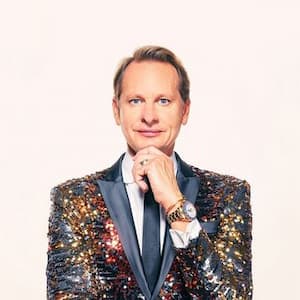 Carson Lee Kressley is an American actor, television personality, and designer. He is best known for appearing in the Bravo series Queer Eye for the Straight Guy. Lee was a motivational host of the TV show How to Look Good Naked. He appeared in Carson Nation and Dancing With The Stars season 13. He is a judge on RuPaul’s Drag Race. Carson alongside Thom Filicia star in the tv series called Get a Room on Bravo.

Carson stands at an estimated height of 5 feet 10 inches (1.78 cm) and weighs about 82 Kgs. He has blonde hair and attractive blue eyes. Further details about his body measurements will be updated as soon as they are available.

Kressly was born in Allentown, Pennsylvania, and raised in Orefield, Pennsylvania. He was born to his father Wilbur and his mother Georgia. He has one sister called Diana Kressley-Billig. His family lived on a farm and raised ponies. From an early age, Carson competed in equestrian events. He was even a member of the U.S. World Cup Saddle Seat equitation team in 1999.

Kressley was raised alongside his two sisters called Diana Kressley-Billig and Beverly Kressley. Diana was a national champion equestrian who runs the 125-acre farm in Lynn Township. Diana has a daughter called Morgan Billing. She graduated from Northwestern Lehigh High School and is also a world-titled equestrian

Carson is openly gay. He came out at the age of 30. Prior to that, there were always rumors that he was gay or bisexual. In 2016, he was in a relationship with Esera Tuaolo an NFL player. There have been some speculations that Carson is dating Queer Eye alum Thom Filicia after the premiere of their tv series Get a Room. However, the two have made it clear that they have never and do not have a romantic relationship.

Lee was a motivational host of the TV show How to Look Good Naked. The show premiered in January 2008. He has contested in multiple shows including; Jeopardy, Dancing with the Stars, The New Celebrity Apprentice, I’m a Celebrity…Get Me Out of Here! and Worst Cooks in America.

He is one of the HouseGuest appearing on the third season of Celebrity Big Brother. Carson has also featured in several films like; The Perfect Man, The Year Without a Santa Claus, 16 to Life, and The Bitch Who Stole Christmas.

Carson released his clothing line for women and men called “Perfect” in November 2006 on QVC. His women’s collection “Love, Carson”, for Shop NBC in April 2012. As an author, he has written four books including; Off The Cuff: The essential style guide for men and the women who love them and You’re Different and That’s Super.

Carson is also known for his love for horses. He is the owner of American Saddlebred horses. In 2009, he won a world title. He is the ambassador for the Melbourne Cup.

Kressley has an estimated net worth of $8 million as of 2022.