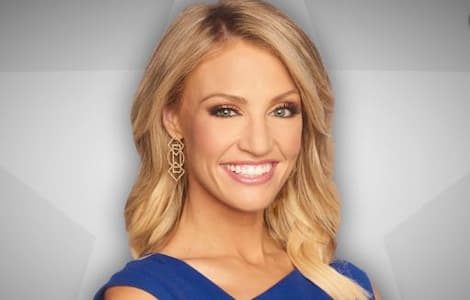 A native of Long Valley, New Jersey, Carley Shimkus is an American anchor and reporter working as a co-host on Fox Nation as well as a headline reporter for Fox & Friends and Fox & Friends First.

Shimkus began working for Fox News as a news producer after graduating from college. Later in 2012, she was promoted to associate producer with the FOX Business Network working for Imus in the Morning.

She later moved to the on-air side of the business. Shimkus now works as headlines reporter for Fox & Friends and Fox & Friends First and as co-host on Fox Nation with Rob Schmitt.

Shimkus stands at a height of 5 feet 10 inches.

Shimkus is the daughter of Zulma and Edward Shimkus. Her mother is from Puerto Rico and worked as a flight attendant. Her father on the other hand is a chemist of Lithuanian descent.

Shimkus has one older sister named Margot. At the moment, there is no more information about her sister. We will update this information as soon as it is available.

Shimkus is married to her husband Peter Buchignani. He works for Amherst Pierpont Securities and specializes in “securitized products sales,” in the business development department.

Peter is the son of Leo and Mary Edna Buchignani. He has two siblings, an older brother, and a younger sister. He attended Princeton University from 2005 to 2009 and graduated with a bachelor’s degree in political science.

Shimkus and her husband Peter met in 2013. They eventually got married in 2015. The couple does not have any children yet.

Speaking about their wedding which happened in 2015, Shimkus said her husband only had one request; that he gets to choose the music.

“This is gonna sound totally nuts but when we were planning our wedding, I pretty much planned the whole thing…that’s what I wanted and he said yes to everything.

“…and then he said ‘how do you feel if our wedding party walked out to the Game of Thrones theme song, and then when we walk out, we walk out to the Michigan fight song,'” Shimkus said.

Carley Shimkus Salary and Net Worth

It is not yet known how much Shimkus earns as a co-host on Fox Nation as well as headline reporter for Fox & Friends and Fox & Friends First. Her net worth is estimated to be around $1 million.