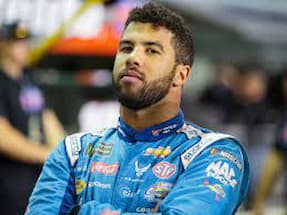 William Darrell “Bubba” Wallace Jr. a native of Alabama is an American professional stock car racing driver. He currently competes full-time in the NASCAR Cup Series. He drives the No. 23 Toyota Camry for 23XI Racing. Prior to this, he was a development driver in Toyota’s driver development program.

Wallace stands at an estimated height of 5 feet 6 inches and weighs about 75 Kgs. He has dark brown hair and brown eyes. Further details about his body measurements are still under review and will be updated soon.

Wallace was born and raised in Mobile, Alabama. He was born to his parents Darrel Wallace Sr. and Desiree Wallace. His father whose white is an industrial cleaning company owner. His mother is African-American. Wallace has a sister called Brittany Wallace.

Wallace has never been married. However, he is in a relationship with Amanda Carter a financial analyst. After dating for years, the two got engaged in July 2021. There is, however, no information about when they plan to get married.

At the age of 9, Bubba had already started racing in the Bandolero and Legends car racing series. He was the youngest driver to win at Franklin County Speedway in Virginia in 2008. He started competing in the NASCAR K&N Pro Series East. Bubba drove Rev Racing as part of NASCAR’s Drive for Diversity program.

Wallace was the first African American to win the Rookie of the Year award in a NASCAR series. In 2012, Wallace made his national series debut in the Xfinity Series. He returned to the Nationwide Series in 2014 for Joe Gibbs Racing in the No. 20.

In 2015, Wallace signed a deal to compete in the Xfinity Series for Roush Fenway Racing. He took part in the season opener at Daytona finishing at 6th. In 2013, the news was announced that Bubba was set to run a full season in the Camping World Truck Series in the No. 54 Toyota owned by Kyle Busch Motorsports.

He became the first African-American driver to win in one of NASCAR’s national series since 1963 on October 26, 2013. He also won the Drivin’ for Linemen 200 at Gateway Motorsports Park. In 2017, he drove the No. 99 Truck for MDM Motorsports won the race.

He took part in the TruNorth Global 250 at Martinsville and Vankor 350 at Texas. He became the first African-American to race in the Cup Series for Richard Petty Motorsports. Bubba made his debut at the Pocono 400 and was able to advance to the second round and start 16th.

Wallace was hired as a new driver by Richard Petty Motorsports on October 25, 2017. In 2019, he won the second stage of the Monster Energy Open at the 2019 Monster Energy NASCAR All-Star Race. Wallce finished sixth in the Pennzoil 400 at Las Vegas.

Wallace has an estimated net worth of $3 million as of 2022.