Nye attended Lafayette Elementary School and Alice Deal Junior High before attending Sidwell Friends for high school on a scholarship, graduating in 1973. He moved to Ithaca, New York to attend Cornell University and study at the Sibley School of Mechanical and Aerospace Engineering. His enthusiasm for science deepened after he took an astronomy class with Carl Sagan. He graduated with a BS in mechanical engineering in 1977.

Nye was born in Washington, D.C., to Jacqueline Jenkins who was a codebreaker during World War II, and Edwin Darby “Ned” Nye who also served in World War II and worked as a contractor building an airstrip on Wake Island. 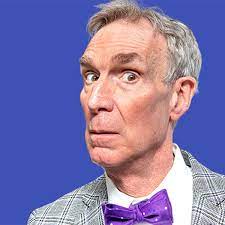 Nye has an estimated net worth of  $8 Million

Nye started doing standup comedy after winning a Steve Martin lookalike contest in 1978. Nye’s friends asked him to do Steve Martin’s impressions at parties, and he discovered how much he enjoyed making people laugh. He began moonlighting as a comedian while working at Boeing. He has stated, “At this point in our story, I was working on business jet navigation systems, laser gyroscope systems during the day, and I’d take a nap and go do stand-up comedy by night.”

He also participated in Big Brothers Big Sisters of America, and volunteered at the Pacific Science Center on weekends as a “Science Explainer”. Nye quit his job at Boeing on October 3, 1986, to focus on his burgeoning comedy career.

During Nye’s 10-year college reunion in 1987, he went to great lengths to meet with Carl Sagan at Cornell. Sagan’s assistant told Nye, “Okay, you can talk to him for five minutes.” In their meeting at the space sciences building, Nye explained that he was interested in developing a science television program. “I mentioned how I planned to talk about bridges and bicycles and so on—stuff that, as an engineer, I’d been interested in—and [Sagan] said, ‘Focus on pure science. Kids resonate to pure science rather than technology.’ And that turned out to be great advice.”

Bill Nye The Eyes of Nye

Following the success of Bill Nye the Science Guy, Nye began work on a comeback project, The Eyes of Nye, aimed at an older audience and tackling more controversial science topics such as genetically modified food, global warming, and race.

However, “shifting creative concepts, infighting among executives and disputes over money with Seattle producing station KCTS” significantly delayed production for years.KCTS was hampered by budgetary problems and couldn’t produce a show pilot on time.”

KCTS went through some distress”, Nye recalled. “When we did The Eyes of Nye, the budget started out really big, and by the time we served all these little problems at KCTS, we had a much lower budget for the show than we’d ever had for the ‘Science Guy’ show which was made several years earlier.” PBS declined to distribute The Eyes of Nye, and it was eventually picked up by American Public Television.

“PBS wanted more serious, in-depth Nova-style shows”, explained co-producer Randy Brinson. The show, which eventually premiered in 2005, lasted only one season. Nye acknowledged that omitting his bow tie on the program was a mistake. “I tried wearing a straight tie. It was nothing”, Nye said. “We were trying something new. It wasn’t me.”

In the early 2000s, Nye assisted in the development of a small sundial included in the Mars Exploration Rover missions. Known as MarsDial, in addition to tracking time, it had small colored panels to provide a basis for color calibration. From 2005 to 2010, Nye was the vice president of the Planetary Society, an organization that advocates space science research and the exploration of other planets, particularly Mars. He became the organization’s second Executive Director in September 2010 when Louis Friedman stepped down.

Nye holds three United States patents: one for ballet pointe shoes, one for an educational magnifying glass created by filling a clear plastic bag with water, and one for a device for training an athlete to throw a ball. He also holds a design patent for a digital abacus.