Todd Chrisley a native of Georgia, is an American real estate tycoon and television personality. He stars in the reality show Chrisley Knows Best on USA Network alongside his wife Julie and his 5 children. The show premiered on March 11, 2014.

Chrisley stands at an average height of 5 feet 10 inches and weighs about 78 Kgs. He has blond hair paired well with his blue eyes.  There are no further details about his body measurements. 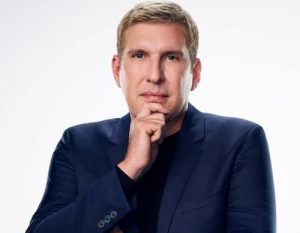 Born Michael Todd Chrisley in Georgia, Atlanta, and raised in Westminster, South Carolina. He was born to his parents Gene Raymond Chrisley and Faye Chrisley. His mother appears on their reality tv show. His father sadly passed away on 11th July 2012. Chrisley was brought up together with his siblings Randy and Derrick Chrisley.

Todd has been married to his wife Julie Chrisley since 1996. There are, however, no exact details about the date of their wedding. This is, however, not their first marriage. Todd was previously married to his high school sweetheart Teresa Terry.  The two had two children together; Lindsie and Kyle Chrisley.

Julie was also married to her high school boyfriend Kenneth Wayne Childress. The two tied the knot on the 15th of March 1991. They finalized their divorce in 1993. Todd and Julie have three children together; Chase Chrisley, Savannah Chrisley, and Grayson Chrisley.

Todd was previously married to his high school sweetheart Teresa Terry.  The two tied the knot in 1990 and finalized their divorce in 1996. The two had two children together; Lindsie Chrisley and Kyle Chrisley.

Todd is the grandfather of Chloe Chrisley. Chloe is his first son Kyle’s daughter. She is being raised by her grandparents because of her father’s substance abuse. Todd and Julie were awarded full custody of Chloe by the court in 2014. Chrisley is also a grandparent to Jackson Campbell, his daughter Lindsie’s son.

Todd stars in the reality show Chrisley Knows Best on USA Network alongside his wife Julie and his 5 children. The show premiered on March 11, 2014. It initially took place in Roswell and Alpharetta, then moved to Nashville, Tennessee on its fourth season.

The show has a total of 8 seasons. The shows spin-off’s include According to Chrisley, What’s Cooking With Julie Chrisley, Growing Up Chrisley, and Chrisley Confessions. Todd has starred in all of the show’s spin-offs.

Currently, Chrisley has an estimated net worth of -$5 million. His main source of income comes from his businesses in real estate. In August 2012, he reportedly filed for chapter 7 bankruptcy protection. He had acquired a $49.4 million debt because of poor real estate investment. In 2017, he face allegations of not filing state income taxes in Georgia, where the Chrisleys once resided.