Sheryl Lee Ralph is an American actress, author, singer, and activist who was born in Waterbury, Connecticut, U.S. In 1977 she made her screen debut in a comedy film A Piece of the Action before she landed her breakthrough role as Deena Jones in Broadway musical Dreamgirls in 1981, for which she received Tony Award nomination for Best Actress in a Musical.

During her career, she has appeared in a lot of movies. She received Independent Spirit Award for Best Supporting Female for her role in the drama film To Sleep with Anger. From 1986-1989 she starred in the syndicated sitcom Its a Living and later had leading roles in the short-lived ABC sitcom New Attitude in 1990.

Sheryl starred as Dee Mitchell in the UPN sitcom Moesha from 1996-2001. From 2013-to 2015 she starred as Maggie Turner in the Nick at Nite sitcom Instant Mom. She released her first book Redefining Diva: Life Lessons from the Original Dreamgirl in 2012. In 2016 on Broadway she played Madame Morrible in Wicked. 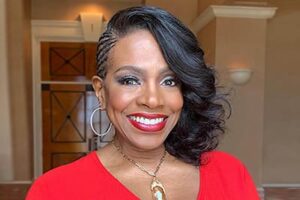 Sheryl attended Uniondale High School in Uniondale, New York. In high school, she starred in a production of the musical Oklahoma where she portrayed Ado Annie. In 1972, she has crowned Miss Black Teenage New York and also graduated that same year(1972). She was the youngest woman to ever graduate from Rutgers University at the age of 19.

Sheryl was one of the earliest winners of the Irene Ryan Acting Scholarship awarded by the Kennedy Center American College Theater Festival. She served as the commencement speaker at Rutgers for the Class of 2003.

Sheryl was born to Ivy and Stanley Ralph. Her mother was a fashion designer and her father was a college professor of African-American ethnicity. She was raised between Mandeville, Jamaica, and Long Island.

Sheryl has been married twice. In 1990 she married Eric Maurice and later divorced in 2001. She then married Vincent Hughes in 2005.

Sheryl has two children a son, Etienne Maurice, and a daughter Ivy-Victoria Maurice.

Sheryl is a renowned activist, singer, and actress.

Sheryl has an estimated net worth of $5 million.

In 1982 Sheryl was nominated for a Tony Award for best actress in a Musical for her role as Deena Jones in Dreamgirls. She released her only album In the Evening, in which the title track peaked at number 6 on the Billboard Dance Music/Club Play Singles chart that same year 1984.

Sheryl starred in the Disney movie Oliver & Company, providing the voice of Rita in 1988. Her first leading role in a film came as Denzel Washington’s wife in The Mighty Quinn released in 1989. She starred with Robert De Niro in the title role in Mistress in 1992. She also co-starred with Eddie Murphy in The Distinguished Gentleman.

She was the cast of the CBS daytime soap opera Search for Tomorrow while starring on Broadway in Dreamgirls. In Justice League and Justice League Unlimited she provided the voice Cheetah. In the 1993 film Sister Act 2: Back in the Habit, she played Florence Watson the mother of Rita Louise Watson (Lauryn Hill).

On the Showtime series Barbershop, she appeared as Claire. She was also featured with son Etienne on MTV’s My Super Sweet 16 and BET’s Baldwin Hills, as well as an episode of Clean House that also featured her two children, Etienne and Ivy-Victoria (aka Coco), named after Ralph’s mother.

It was announced on June 16, 2009, that she would join the cast of the Broadway-bound musical The First Wives Club as Elyse. She guest-starred in the Young Justice episode “Terrors” as Amanda Waller in 2011.