Shannon Sharpe a native of Illinois, is an American sports analyst and former American football tight end for the Denver Broncos. He also played for the Baltimore Ravens of the National Football League (NFL). He has previously co-hosted Skip and Shannon: Undisputed on Fox Sports 1 alongside Skip Bayless. In addition, he was an analyst for CBS Sports on its NFL telecasts. Sharpe played 12 seasons for the Broncos and two seasons for Ravens. He has won three Super Bowls.

Sharpe was born in Chicago, Illinois, and raised in Glennville, Georgia. He was born to his parents Pete Sharpe and Mary Alice Dixon. His older brother is former NFL star, Sterling Sharpe. Sharpe went to Glennville High School where he was an all-state player in three sports.

Sharpe is not married and has never been married before. He has, however, dated a few people. His most recent relationship was with Katy Kellner, an American fitness trainer. The two dated for some time until they broke up in 2020. Sharpe keeps most of his personal life private, therefore, not much is known about his relationships. 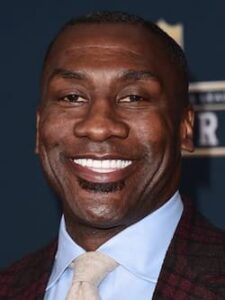 Sharpe is the younger brother of former NFL star wide receiver Sterling Sharpe. Sterling is also an analyst for the NFL Network. He played for the Green Bay Packers from 1988 to 1994.

After his Stellar college career, Sharpe was selected in the 7th round of the 1990 NFL Draft by the Denver Broncos. He first played as a receiver catching only 29 passes. He was later converted to tight end. In caught 53 passes in his third season.

Shannon became a commentator for the CBS Sports pregame shows The NFL Today. He also anchored the Sprint Halftime Report and the Subway Postgame Show. Later in 2013, Shannon was hired as a columnist and spokesperson for FitnessRX For Men magazine. He was on their September 2013 cover.

He now hosts Sirius NFL Radio’s Opening Drive morning program together with Bob Papa. On August 6, 2011, Shannon was inducted into the Pro Football Hall of Fame. On September 6, 2016, Sharpe and Skip debuted their sports show Skip and Shannon: Undisputed. In addition, Shannon has a podcast called Club Shay Shay.

As one of the top sports analysts, Sharpe makes an annual salary of $3 million.