Rose was in New Zealand and celebrates her birthday on the 6th of November. She has not yet disclosed any information about her age or date of birth. However, this information will be updated as soon as it is available.

Hardy stands at an average height of 5 feet 7 inches and is of moderate weight. Her looks are paired well with her blonde hair and her beautiful hazel eyes. As a tattoo artist, Hardy also has multiple tattoos drawn. Among all her tattoos, her palm tattoo which is 2 halves of a butterfly making up a whole butterfly, was done by a close friend which makes it more important. 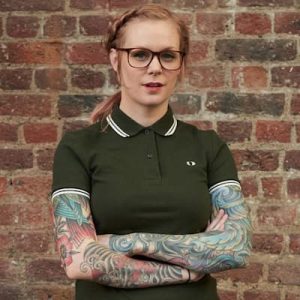 Hardy was born and raised in New Zealand. She was born to her mother Debbie Hardy and her father whose information she has not yet disclosed.  Hardy has a sister. Despite being a widely known tattoo artist, Rose prefers to keep some of her information private. Rose holds a Kiwi nationality meaning she is a citizen of New Zealand.

Hardy was born and raised in New Zealand. She is a citizen of New Zealand and holds a Kiwi nationality.

Hardy appears to be currently single. She was, however, in a previous relationship with her ex-boyfriend Justin Weatherholtz. The two dated back in 2013 through 2014. Hardy even introduced her then-boyfriend to her mother.

After breaking up with her ex-boyfriend, Rose decided to keep her relationship matters low-key. However, further information about her current relationship status will be updated as soon as it is available.

Rose is one of the tattoo artists starring on the Netflix show Tattoo Redo. The show features a group of tattoo artists transforming badly done tattoos into great cover-ups with designs chosen by the clients’ loved ones. Rose started her tattoo career back in New Zealand before moving to New York.

Aside from starring on the tv show, she also works for the Mikiri gallery in Brooklyn. Rose is also the head designer and owner of Tenderthorn Studios. She founded the studio in 2019. In addition, the tattoo artist designs for a company called Tattooed Steel. In 2017, Rose appeared as a judge on E4’s Tattoo Artist of the Year.

As of 2021, Hardy’s net worth is estimated to be $1 million. She has gained her net worth from her career as a tattoo artist and tv personality. Hardy stars in the Netflix show Tattoo redo. She also works at the Mikiri Gallery in Brooklyn.