A native of Bloomington, Illinois, Rick Scott is an American politician serving as the junior United States senator from Florida. He previously served as the 45th governor of Florida from 2011 to 2019.

During the 2018 United States Senate election in Florida on April 9, 2018, Rick announced his candidacy in vying for the senate seat held by incumbent Democrat Bill Nelson. He won the race on November 18 and competitor, Bill Nelson, conceded that same day.

Scott is the son of Esther J. Fry Scott (October 20, 1928 – November 13, 2012), a clerk at J. C. Penney and Gordon William Myers. He never met his biological father but according to his mother, he was an abusive alcoholic. His parents got divorced while he was an infant.

His mother then remarried in 1954, to Orba George Scott Jr., a truck driver who died in 2006. George adopted Rick as a young boy and he took up his stepfather’s surname and became known as Richard Lynn Scott. 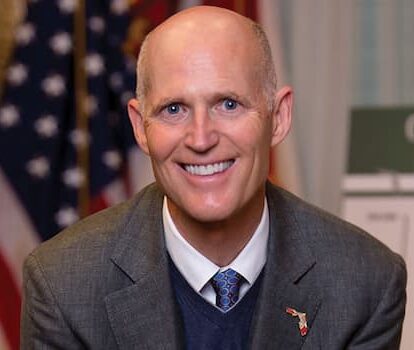 He has four siblings and is the second born in his family. While growing up, his mother had to work as a clerk and take up other jobs also as they struggled financially.

Rick is married to Ann Scott. The couple has been married since 1972. They fell in love while in high school and got married when Rick was 19 and Ann was 20 years old. They have two daughters; Allison and Jordan and six grandchildren: all grandsons. They are; Sebastian, Auguste, Louie, Quinton, Eli, and Jude.

Rick has two daughters, Allison and Jordan. In September 2018, Rick was in the midst of a controversial $5 million blind trust loan he loaned to a Delaware company privately owned by his daughter Jordan.

According to Bulldog, you wouldn’t know it by reading Scott’s recent “full and complete” federal financial disclosure form. His daughter, Jordan isn’t mentioned in the 125-page document and the governor, rather, listed the loan as an “accounts receivable from a business,” Seabass Properties LLC.

Senator Rick disclosed his blind trust assets in late July while campaigning against Sen. Bill Nelson and until then, Florida law prohibited him from having any knowledge or control of the blind trust’s assets. Still, Rick directed the blind trust loan to his daughter’s company, disguising it as a business investment.

Jordan Scott is one of Rick’s daughters. Rick’s son-in-law, Jeremy, Jordan’s then-husband, sat on the board of the largest asset in Rick’s blind trust for almost two years. He was a nonvoting member of the board of Continental Structural Plastics, a company that manufactures car parts, from October 2013 to June 2015, according to his resume. By then he was still married to Jordan. Jeremy, however, refused to comment on this.

Scott attended North Kansas City High School and graduated in 1970 after which he attended one year of community college and enlisted in the United States Navy.  He also attended college on the GI Bill, graduating from the University of Missouri–Kansas City with a Bachelor of Business Administration degree.

Scott would later earn a Juris Doctor degree by working his way through Southern Methodist University. On November 6, 1978, he was licensed by the Texas Bar to practice law.

Where Does Rick Scott Live

The Republican politician stands at a height of 1.83 m.

Rick has an estimated net worth of around $75 million.

Was Rick Scott In The Military

It’s true Scott was in the Military. Rick enlisted in the United States Navy, where he served on active duty aboard the USS Glover for 29 months as a radar man.

On April 9, 2018, after months of speculation about a potential run, Rick officially announced that he would challenge incumbent Democratic U.S. Senator Bill Nelson in the 2018 election.

He defeated Rocky De La Fuente in the Republican primary and in the general election, Rick’s involvement in a large Medicare fraud case stirred controversy. He responded with ads accusing his opponent Bill Nelson of having cut Medicare benefits and stolen from Medicare.

Fact-checkers found that both of Rick’s assertions were false. During the campaign, Rick characterized Nelson as a “socialist”; PolitiFact described the assertion as “pants-on-fire” false.

During the campaign, Rick sought to avoid mentioning President Trump and at times criticized or distanced himself from the actions of the Trump administration.  However, in the past, Scott used his friendship with Trump to boost his profile and had been an early and vocal supporter of Trump in 2016.

On November 18, 2018, after a machine recount and a manual recount, incumbent Senator Bill Nelson conceded the race to Rick Scott.

In the 2016 Republican primaries, Rick endorsed Trump after he won the Florida primary.  Scott chaired a pro-Trump super PAC in the 2016 election and unlike many other established Republicans, Scott praised then-candidate Trump as tough on terrorism and as an outsider during the 2016 Republican convention.

In polls conducted in October 2018, Scott had a slightly higher approval rating over Nelson Bill at 52-41 percent.

Rick made his first attempt to buy the Hospital Corporation of America (HCA) in April 1987. While still a partner at Johnson & Swanson, Rick formed the HCA Acquisition Company with two former executives of Republic Health Corporation, Charles Miller and Richard Ragsdale.

Columbia Hospital Corporation, in 1994, merged with HCA, “forming the single largest for-profit health care company in the country.” Rick became CEO of Columbia/HCA and according to The New York Times, “in less than a decade, Mr. Rick Scott had built a company he founded with two small hospitals in El Paso into the world’s largest health care company, a $20 billion giant with about 350 hospitals, 550 home health care offices and score of other medical businesses in 38 states.”

On March 19, 1997, investigators from the F.B.I, the Internal Revenue Service, and the Department of Health and Human Services served search warrants at Columbia/HCA facilities in El Paso and on dozens of doctors with suspected ties to the company. Eight days after the initial raid, Rick signed his last SEC report as a hospital executive and four months later, the board of directors pressured Rick to resign as Chairman and CEO.

Rick was succeeded by Thomas F. Frist Jr. He was paid $9.88 million in a settlement, and was left owning 10 million shares of stock worth over $350 million.

During Rick’s 2000 deposition, he pled the fifth many times, and in settlements reached in 2000 and 2002, Columbia/HCA pleaded guilty to 14 felonies and agreed to a $600+ million fine in what was at the time the largest health care fraud settlement in American history.

Columbia/HCA admitted to systematically overcharging the government by claiming marketing costs as reimbursable, by striking illegal deals with home care agencies, and by filing false data about use of hospital space. They also admitted to fraudulently billing Medicare and other health programs by inflating the seriousness of diagnoses and to giving doctors partnerships in company hospitals as a kickback for the doctors referring patients to HCA.

They would file false cost reports, fraudulently billing Medicare for home health care workers, and paid kickbacks in the sale of home health agencies and to doctors to refer patients. In addition, they gave doctors “loans” never intending to be repaid, free rent, free office furniture, and free drugs from hospital pharmacies.

Scott is known to be a supporter of the “traditional” marriage between a man and a woman. He declined to answer questions about whether the state ban on same-sex marriage discriminates against gay people.

In October 2018, the TV advertising war intensified in Florida’s U.S Senate race. The ads ran for a week in the Tampa, Fort Myers and West Palm Beach television markets.

Rick also launched another ad that accused Nelson of being uninformed, which was the governor’s way of pushing back against criticism that he had cut education funding. Click here to watch.

Scott pushed for job creation in the Sunshine State and by the administration’s count, the state added 1.5 million jobs during his period as governor. The state’s unemployment rate also dropped steadily from 11.1 percent in 2011 to 3.7 percent in August 2018.

Scott refused to expand Medicaid, a move that left more than 700,000 low-income Floridians without coverage, according to an independent analysis. He argued the cost, which would have been completely covered by federal taxpayers for the first three years under Obamacare,  would have ultimately left Florida taxpayers holding the bag. He would later endorse expansion in 2013 but abandoned the effort after the Republican-controlled legislature opposed it.

According to critics Rick made several decisions that led to the algae blooms befouling Florida waters. This kept away tourists, slashing the budget of the South Florida Water Management District; which advises the Army Corps of Engineers on Lake Okeechobee discharges that cause algae blooms in St. Lucie and Caloosahatchee rivers.

In 2011, weeks after taking office Rick rejected more than $2 billion from the Obama administration to build a high-speed rail line along the I-4 corridor between Orlando and Tampa. The move was roundly panned, but the governor said he was concerned that the project would suffer cost overruns and operating losses from low ridership that Florida taxpayers eventually would have to absorb. Earlier in 2018, he announced that the state would consider private bids to build a high-speed rail link between the two cities that would link Tampa area beaches with Orlando area theme parks.

Rick Scott On The Issues

To know more about Rick Scott On The Issue, click here.