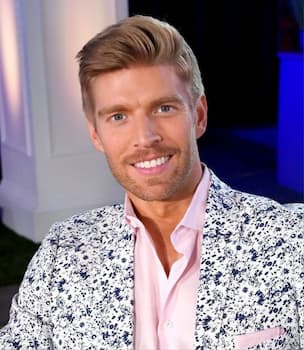 Born in the USA, Kyle Cooke is an American TV personality who is best known as a cast member on Bravo’s reality show, Summer House.

Cooke is in a relationship with Amanda Batula, an American senior graphic designer and art director. She is also a cast member of Bravo’s reality show, Summer House.

Cooke and Amanda met each other in 2015 and began dating then. Their love story has also been televised. In 2018, the couple got engaged.

Cooke is the founder of an app called FENIX. It is a subscription-based nutrition consulting app that is available on the Apple Store for iOS devices under the name FENIX 1:1.

He has previously worked at Birddogs, a company that sells activewear and Men’s Gym Shorts. Kyle joined the company in 2015 and worked as its chief brand officer.

From 2013 to 2014, Cooke also worked for ZocDoc where his job was to achieve sales targets and the company’s strategic objectives. After leaving ZocDoc, he joined Blown Away as a co-founder and advisor.

Cooke is a cast of Bravo’s reality series Summer House. The show follows a few men and women between their late twenties to early thirties who spend their weekends and summer having fun.

According to his bio on bravotv.com, “Kyle finds himself this summer maturing as an entrepreneur and soon-to-be husband. Although the pandemic forced Kyle to postpone his wedding to Amanda, their business venture, Loverboy, is booming.

“The couple have successfully navigated their first five months of quarantine without breaking up and are ready to spend the summer living and working together with some welcomed company.”

Other cast members of the show include;

Cooke has an estimated net worth of around $1 million.