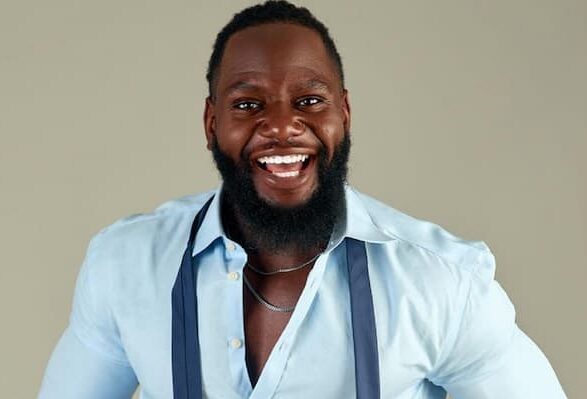 A native of Lagos, Nigeria, Jimmy Odukoya is the son of Pastor Taiwo and the late Bimbo Odukoya. He has over the years been able to build a career for himself in the Nigerian movie industry and is regarded as one of the famous faces in movies with a focus on English movies

Odukoya stands at a height of 5 feet 11 inches tall. His weight and other body measurements have been publicly not mentioned. We will update this section once the information is available.

Odukoya was born and brought up in Lagos, Nigeria by his devoted, loving, and caring parents. His parents are Pastor Taiwo Odukoya, a popular cleric in Nigeria, and his mother late Pastor Bimbo Odukoya, who died in the popular Sosoliso plane crash in 2005. Jimmy Odukoya has four siblings, two females from his late mother and two males from his now late stepmother Nomthi Odukoya who his father married in 2010.

Odukoya is happily married to his devoted wife Kemi Odukoya who is a London-raised English graduate of Oluwakemi Folashade Banjoko. The couple exchanged their vows in London on March 9, 2013, and their union is blessed with two kids, a boy, and a girl.

Odukoya is a man of many enterprises, he is an artist, model, actor, poet, motivational speaker,  TV personality, and dancer. However, his career surrounds him being a pastor. When he moved to Oklahoma in the USA, Jimmy became active in a local church called Transformation church, previously known as Greenwood Christian Center, under Bishop Gary and Debbie McIntosh.

He was in the youth church, speaking during conferences and assisting in the growth and development of the ministry. During his college days, he switched to becoming a key player in assisting in the active college ministry of the Transformation church called B.I.O (Bring It On).

After his proving, he was put in charge of all Church operations and Service coordination even as he acted as an assistant to the then associate pastor, Pastor Calvin Battle, who is now the pastor of Destiny Center. After years of service at the Transformation Church, Jimmy Odukoya moved on to Bixby Community Church, where he became the Assistant to the Senior Pastor Dr. Steve Greene.

He subsequently earned his ministerial license in 2009. In the same year, he was ordained Pastor at Fountain Of Life Church, a church founded by his father, Taiwo Odukoya. Jimmy Oduokya was made the Assistant Pastor of Church 3:16, a youth ministry of Fountain of Life Church after he returned from the USA. Pastor J worked with Coordinating Pastor, Pastor Oyinda Soderu until he became the Coordinating Pastor of the Church 3:16 in February 2012. His wife is also a pastor at Church 3:16.