She is also the CEO of three marketing companies. She is the founder of JXA Fashion, Shah Beauty, and The Real Shah Lashes.

Shah is a cast member of the new Bravo’s reality tv show, The Real Housewives of Salt Lake City. The show premiered on November 11, 2020.

According to bravo.com, Jen is a Tongan and Hawaiian who grew up in Salt Lake City and often felt like she often stuck out in her traditionally white, Mormon world.

She learnt about the historical mistreatment of black people in the Mormon religion after which she converted from Mormonism to Islam. 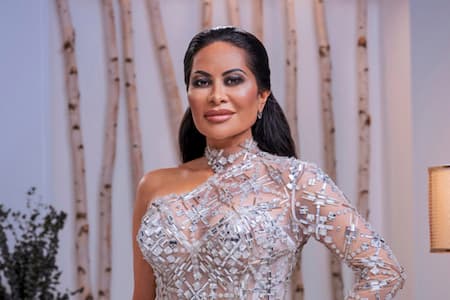 “With an extravagant personality and sharp tongue, she can go from 0 to 100 very quickly, but usually comes back with apologies and love. But it’s not always fun and games for Jen with this group of women when she quickly finds herself at the center of the drama,” reads her bio on bravo.com.

Other cast members of the show include;

Shah is the daughter of Sione Kaisa Lui and Charlene Bonnie Vincent Lui. She was born to a family of six. Her father was born in Tonga and her mother Charlene in Hawaii.

Shah’s father Sione moved to the USA to attend school at Brigham Young University and that is where he met his wife, Charlene.

He is one of the founders of the National Tongan American Society as well as the founder of the Provo Steelers Rugby Club. Her father died in 2018.

Shah was born to a family of 6. Her other siblings are Judd, Jenohn, Jessica, Jerrit, and Jacob. At the moment, there is no more information about her siblings.

Shah is married to her husband Sharrieff Shah. Her husband is a football coach at the University of Utah where he is the cornerback/special team coordinator for the Utah Utes football team.

Shah and her husband Sharrieff have two children together; both boys. Their first child Sharrieff Shah Jr. was born on March 10, 1994, while their second, Omar Shah was born in 2003.

Their eldest son, Shah Jr. graduated from the University of Utah in 2016 with a bachelor’s degree in exercise science and kinesiology. He later went on to continue his pre-med education at the same university until 2019.

The couple’s youngest son plays for the East High School football team and is set to graduate in 2021.

Shah, a reality television star, was arrested on March 30, 2021, on charges of conspiracy to commit wire fraud and money laundering. She is accused of using her businesses to defraud hundreds of vulnerable victims of millions of dollars. According to the indictment, she and her assistant Stuart Smith allegedly used telemarketing tactics “to deceive victims into investing money” in their businesses. The victims included elderly people, as well as participants in the U.S. Small Business Administration’s Paycheck Protection Program.

On Friday, January 6, 2023, Shah was sentenced to 78 months in prison in federal court in New York City. She was also sentenced to five years of supervised release once she is released from prison. Shah showed no visible reaction as she stood and faced the judge when her prison term was announced. Her sentence was the result of her guilty plea to charges of conspiracy to commit wire fraud and money laundering.

Shah’s height and weight measurements are not available at the moment.

Shah has an estimated net worth of between $1 million-$3 million.