Fonda is the daughter of American actor Henry Fonda (1905–1982) and Canadian-born socialite Frances Ford Brokaw (1908–1950). Peter Fonda, her brother was also an actor. Her mother died by suicide while undergoing treatment at Craig House psychiatric hospital in Beacon, New York, in 1950, when Fonda was 12. 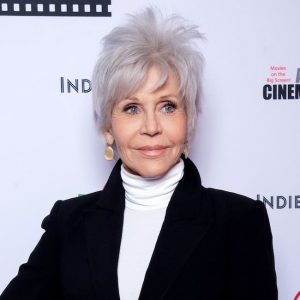 Fonda started her acting career with the 1960 Broadway play There Was a Little Girl. Films like Period of Adjustment, Cat Ballou, and Barefoot in the Park catapulted her to fame in the 1960s. She was also a seven-time Oscar winner.

Her first exercise video, Jane Fonda’s Workout, was the highest-selling VHS of all time. She retired from acting in 1991 and returned to the screen with Monster-in-Law in 2005. In 2009, she returned to Broadway after a 49-year absence from the stage. Fonda currently stars in the Netflix comedy series Grace and Frankie.

Fonda was a visible political activist in the counterculture era during the Vietnam War. She was photographed sitting on a North Vietnamese anti-aircraft gun on a 1972 visit to Hanoi, during which she gained the nickname “Hanoi Jane”. Also, she has protested the Iraq War.

Fonda has an estimated net worth of $200 million.