Elliott Brown is the rumored boyfriend of American singer, dancer, actress and Youtuber, Jojo Siwa. Brown is American as well.

According to his Instagram bio, Brown is committed to playing football at the University of Nebraska

It is still not know how old Brown is but his rumored girlfriend, Jojo, is 16 years old as of 2019.

There is no information about his family at the moment. We will provide this information as soon as it is available.

For weeks now, Brown and Jojo have been suspected to be dating. And although they have not confirmed whether they are dating or not, today, on March 2, 2020, Jojo posted a video of them dancing on Instagram. However, this is not the first time Jojo has posted a photo of them. 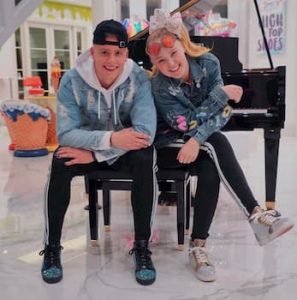 She had posted another photo about six days ago where she referenced him as E in the caption. Brown also posted a photo of themselves together on Instagram and Jojo replied. the caption read; “Sø Błëssëd… håd suçh ån amåziñg timë øut in Cåli w ëveryøne❤️” Jojo replied writing, “best weekend ever” with a pretty loving emoji.

As earlier mentioned, neither of them have confirmed whether they are dating or not However, netizens already believe these two are already dating and have taken to Twitter to express how they feel.

Some of the tweets read;

“how did jojo siwa get a boyfriend before me??”

she not in her 20s crying on twitter and keeping tabs on little kids, that’s how

No FUCKING way jojo siwa has a bf BEFORE ME…
There is literally no hope for me🙃 pic.twitter.com/G7knjsCEZQ