Dennis Allen is an American football coach who is the defensive coordinator for the New Orleans Saints of the National Football League (NFL).

Allan was born in Atlanta and grew up in Hurst, Texas near Fort Worth. He graduated from L. D. Bell High School.

He later attended Texas A&M University and played as a safety on R. C. Slocum’s “Wrecking Crew” defense. He made an interception in the fourth quarter that secured an 18-9 win for Texas A&M over rival Texas. 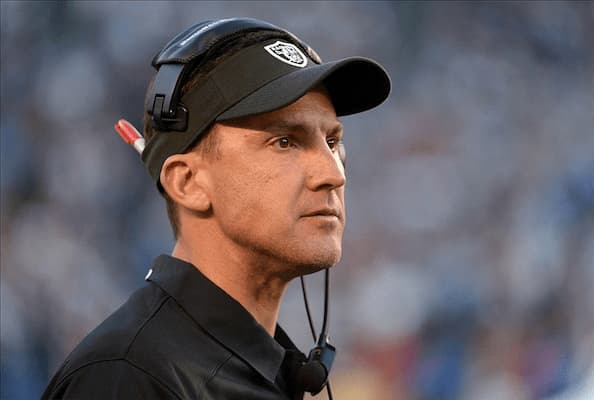 During the 1994 and 1995 seasons, Allen started the final 21 games of his collegiate career and was part of a defensive unit that ranked in the top five in the nation.

In 1995 Allen earned a B.B.A. in management from the Texas A&M School of Business Management. LAter in 1996, he signed with the Buffalo Bills as an undrafted free agent but was cut during training camp.

Allen is a married man. He is married to his wife, Alisson. Allen and Alisson have a son, Garrison, and a daughter, Layla.

Allen began his coaching career at his alma mater Texas A&M. He began as a graduate assistant coach under his former coach R. C. Slocum.

While in that position from 1996 to 1999, he mostly worked with the secondary while pursuing a master’s degree in kinesiology from the Texas A&M College of Education.

In 2009, the Saints won Super Bowl XLIV in which the Saints ranked 3rd in interceptions despite giving up 321 yards per game.

After his success with the Saints’ secondary, Allen was hired to be the Denver Broncos Defensive Coordinator. The Broncos defense was in the bottom half of yards allowed, ranked 23rd, but was 5th in the league in sacks in 2011.

Allen is the first Raiders defense-oriented head coach since John Madden’s retirement after the 1978 season.

In his first season as head coach, the Raiders struggled. They finished the 2012 season with a record of 4–12. That offseason, the Raiders were facing salary cap problems and had traded away most of their draft picks prior to Allen’s arrival.

That did not allow him to establish his system with the right players. In the middle of the 2013 season, Allen decided to bench quarterback Terrelle Pryor (who was injured) for undrafted rookie Matt McGloin, in hopes of salvaging the rest of the season.

Pryor continued to be benched although he was healthy enough to return.

On January 20, 2015, Allen was hired by the Saints to be a defensive assistant. Later on November 16, 2015, he was promoted to defensive coordinator after Rob Ryan was fired.

On November 29, Allen had his first game as defensive coordinator. During that game, the Saints were defeated by the Houston Texans 24–6. His defense gave up 362 yards while recording one sack and one interception in the loss.