Cheslie Corrinne Kryst a native of Michigan, was an American model, beauty pageant, television presenter, Lawyer, and titleholder of Miss USA 2019. She represented the USA at the Miss Universe 2019 competition. She was able to finish in the top ten. Kryst became a New York correspondent for Extra in October 2019.

Cheslie was 5 feet 6 inches tall approximately 1.68 meters. She weighed about 50 Kgs (110 lbs). She has black hair and beautiful brown eyes. Further details about her body measurements are not yet available.

Kryst was born in Jackson, Michigan. She was born to her father Rodney A. Kryst a polish-American and her mother April Simpkins African-American mother. Her mother was a beauty pageant. She was crowned Mrs. North Carolina US. She was raised alongside her five siblings; Asa, Chandler, Jet, Brooklyn, and Page. Her family relocated from Michigan to Charlotte, North Carolina. From there, they settled in Rock Hill, South Carolina, and later in Fort Mill.

Cheslie was not married at the time of her death. She has also never been married before. She appeared to be single. The 30-year-old was quite discreet about her personal life, therefore, not much is known about her past relationships. 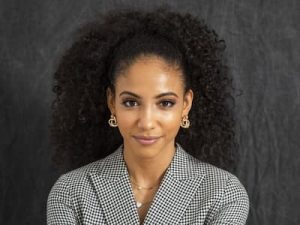 On January 30, 2022, Kryst was pronounced dead after falling off from The Orion, a 60-story high-rise apartment building in Midtown Manhattan. She lived on the 29th floor of the building. She died from suicide and reportedly left a suicide note to her mother stating that she left all her belongings to her.

Kryst went to Northwestern High School then later transferred to Fort Mill High School. After high school, she attended the Honors College at the University of South Carolina. Kryst later graduated with a degree in marketing and human resource management from Darla Moore School of Business. She earned her Juris Doctor and Master of Business Administration from Wake Forest University School of Law.

In 2019, Cheslie was crowned Miss USA at the age of 28 and 4 days. She crowned Laura Little as her successor for the Miss North Carolina USA title. Cheslie represented the USA at the Miss Universe 2019 competition. She was able to finish in the top ten.

Chelsie was a licensed attorney who practiced law in both North Carolina and South Carolina. She worked at Poyner Spruill LLP, practicing complex civil litigation. In addition, she worked pro bono for low-level drug offenders. She worked with Brittany K. Barnett to free a client who was sentenced to death. Cheslie founded the Fashion blog White Collar Glam.

Kryst’s estimated net worth is in the range of $1 million – $5 million.