A native of the Pacific Northwest, Callie North is a bio-regional seasonal folk herbalist, multi-creative artist, teacher, and mother who is known for Alone Season 3.

Most recently she will be featured in Alone: The Skills Challenge season 1 as a participant which is scheduled to premiere on Thursday, August 4th at 10:30 pm ET/PT, moving to its 10 pm ET/PT timeslot.

North is 33 years old as of 2022. Callie was born in 1988/1989 on Lopez Island, Washington. Her date of birth and birthday has not been mentioned publicly. We will update this section once the information is available.

North stands at a height of 5 feet 8 inches and weighs around 77 kg.

North attended alternative schools and was given the chance to follow her desires and travel the world from a very young age. Upon graduating high school, her adventurous spirit and independence led her on numerous journeys around the globe. 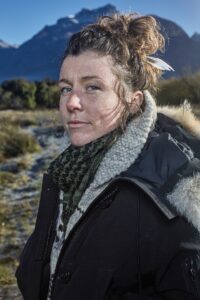 North was born and grew up in the Pacific Northwest and consumed her formative years exploring the waters and forests of her surrounding home. Growing up Callie loved spending time with her family. Moreover, the teacher’s parents made sure that their daughter will grow up to be a responsible and respectful lady. Nevertheless, Little is known about her sister or brother.

North is happily married to her loving and caring husband Randy, who was a participant in Alone Seasons 2 & 5. However, she and Randy reside off-grid in a beautiful forest, with their happy and curious daughter River Selkie, alongside a pond and seasonal creeks.

North has an estimated net worth of $ 1 million.

North is one of the contestants who will be featured in Alone: The Skills Challenge season 1. In the show, former Alone participants contend head-to-head in creative build challenges devised by one of their peers. They’ll have to use only the natural resources and basic tools around them to complete tasks such as creating an elevated shelter, a watercraft, and a hand-crafted oven.

The returning adventurers for Alone: The Skills Challenge include North and Rodriguez, Britt Ahart from seasons 3 and 5, as well as Joel Van Der Loon from season 7, Lucas Miller from season 1, and Jordan Jonas, the winner of season 6, and Alone Season 8 winner Clay Hayes.