A native of Spartanburg, South Carolina, United States, Ainsley Earhardt is a popular American author and conservative television news journalist. She is a co-host of Friends & Fox.

Earhardt is 45 years old as of 2021. She was born on 20 September 1976  in Spartanburg, South Carolina, United States. She celebrates her birthday on 20 September every year.

Earhardt attended Sharon Elementary School. However her family moved to the Columbia, South Carolina, area when she was still in elementary school, and later she graduated from Spring Valley High School in 1995.

After high school, she attended Florida State University before moving to the University of South Carolina, where she graduated with a B.A. in journalism. 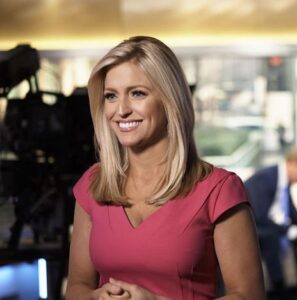 Earhardt was born and brought up in Spartanburg, South Carolina, the United States by her parents. She is the daughter of Dale Earhardt and Lewie Wayne. Also, she has two siblings, an older sister (Elise Giles), and a younger brother (Trenton Graham Earnhardt).

Earhardt’s had her first marriage with Kevin McKinney in April 2005 and ended in divorce in 2009. In October 2012, she happily married to former Clemson University quarterback Will Proctor. They were blessed with a beautiful daughter called Hayden Dubose Proctor.

Later six years of marriage, Proctor filed for divorce in October 2018 after she declared their separation amid allegations that he had been unfaithful.

In addition to Earhardt’s role on Friends & FOX, she shows up across FNC’s on-request subscription-based streaming service FOX Nation as co-host of FOX & Friends After the Show Show, circulating weekday mornings at 9 AM/ET.

In December 2018, she introduced Ainsley’s Holiday Special on FOX Nation in which she featured uplifting stories for the holiday season and included charitable associations that she traveled across the country to highlight.

She additionally reported on the Veterans Affairs hospital investigation in Phoenix, AZ, and the murder investigation involving the New England Patriot Aaron Hernandez. In May 2018, she gave on-location, live coverage of the royal wedding of Prince Harry and Meghan Markle.

Before joining FNC, she worked as an anchor for KENS-TV (CBS 5) in San Antonio, Texas, and WLTX-TV (CBS 19) in Columbia, SC, where she was titled “Best Personality of the Year” in Columbia Metropolitan Magazine.