Hall graduated from Maumee Valley Country Day School in 2006. She graduated from The Ohio State University in 2010 with a Bachelor of Arts with a minor in theatre and strategic communication with a focus on acting. She was a four-year Morrill Scholar, acquiring a full academic scholarship to attend the college.

Hall was born and brought up by her caring and loving parents in Toledo, Ohio, United States of America. Her parents are Valencia Hall and her father’s name is not known to the public. We will update this section as soon as the information about her father’s name is available. Hall has two older brothers. 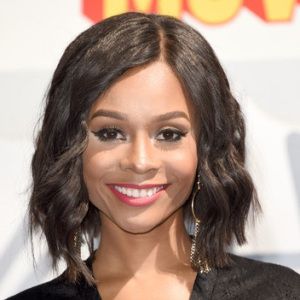 Zuri is now in a relationship with an NFL player Sean Culkin. The couple started dating in 2018 soon after Zuri had broken up from her 6-year relationship with Mettin Copier a Dutch soccer player, from 2012 to 2018. Her kids have not been mentioned anywhere. However, we will update this as soon as their information is available.

Hall has an estimated net worth of around $1 million-$5 million.

She also worked as an official MC for the Indiana Pacers’ home games for the 2010-2011 and 2011-2012 NBA seasons. Earlier, she emceed the 2011 Big Ten Tournament, the WNBA’s Indiana Fever, and the MiLB’s Indianapolis Indians.

She also acted as the MC for the NCAA Women’s Final Four entertainment events, and “Tourney Town” for three years – Indianapolis in 2011, Denver in 2012, and Nashville in 2013.

In 2012, she was the official MC for the Super Bowl Village, a 10-day-long entertainment for Super Bowl XLVI, in Indianapolis. In the same year, she was featured as a guest correspondent on BET’s 106 & Park. She was the co-host of ‘Trending 10: Live’, a daily music countdown show on Fuse TV.

Hall was the first female to defeat the position of Face of MyINDY-TV after she contested hundreds of the positions. At WNDY-TV in Indianapolis, Zuri covered local events, starred in station PSAs, and interviewed celebrities.

One year after graduating from college, Hall won a Regional Emmy Award for Outstanding Host and Talent.

In 2017, she earned a Daytime Emmy Award nomination for the Outstanding Entertainment News Program as a part of E! News.