He is the main host of the series Ghost Adventures airing on Travel Channel. He has also appeared in several tv series including Paranormal Challenge, Nightline, and Deadly Possessions.

Bagans stands at a height of 6 feet tall which is approximately 1.83 meters. He weighs about 88Kgs and has black hair. There are no further details about his body measurements. However, these details will be updated as soon as they are available.

Bagan was born in Washington, D.C, and raised in Glen Ellyn, Illinois. He was born to his mother Nancy Knapp and his father whose information he has not yet disclosed. His mother was an interior designer. Zak was born second in his family. 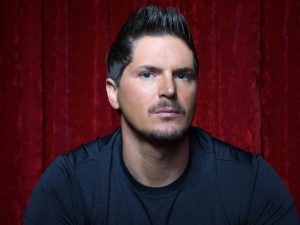 He has a sister named Meredith Bagans. Zak’s mother has been married twice. Her first marriage was to Zak’s biological father and her second marriage was to her current husband. She gave birth to two other children Sky and Phil.

Bagans is the main host of the tv series Ghost Adventures airing on Travel Channel. The series premiered in 2008. Ghost adventures initially started as a documentary film in 2007. The film aired on the SciFi Channel. It was produced by Zak and Nick Groff. In 2014, Zak created a spin-off series titled Ghost Adventures: Aftershocks.

In 2016, Zak was featured in the tv series Deadly possessions. The series premiered on April 2, on Travel Channel. In the show, Bagans finds prospective items for a “haunted museum” located in Las Vegas, Nevada. The museum has 33 rooms with each having various artifacts on display. The museum was opened to the public in October 2017.

The haunted museum received a Las Vegas Mayor’s award for historic preservation and adaptive reuse. Disney+ channel announced in May 2021 its plans to air an upcoming horror anthology show titled The Haunted Museum with Zak as the host and executive producer.

As an author, Bagans has co-written a book together with author Kelly Crigger. The book is titled Dark World: Into the Shadows with the Lead Investigator of the Ghost Adventures Crew. The book debuted on September 23, 2011, on The New York Times Best Seller list at No. 18. He published his other book Ghost-Hunting For Dummies in December 2019.

Bagans appears to be currently single. However, he has had past relationships. He was recently in a relationship with American model Holly Madison. The two started dating after Holly’s divorce from her ex-husband Pasquale Rotella.

Holly and Zak dated for a while and reportedly broke up in February 2021. Zak was previously in a relationship with Christine Dolce a cosmetologist. Sadly, Christine died in 2017 from liver failure.

It appears that Zak does not have any children yet. He has previously faced rumors that he has a daughter but he denied these rumors.

Bagans is the owner of a “Haunted Museum” located in Las Vegas, Nevada. The museum has 33 rooms with each having various artifacts on display. The museum was opened to the public in October 2017.  Some of these items on display include Bela Lugosi’s mirror, the Dybbuk box, Peggy the Doll, and Jack Kevorkian’s “Death Van”