A native of Palo Alto, California, United States, W. Kamau Bell is a popular American television host and stand-up comic. He has hosted the CNN series United Shades of America since 2016 and hosted the FXX television series Totally Biased with W. Kamau Bell from 2012 to 2013.

Bell was born in Palo Alto, California, and grew up in Alabama, Boston, and Chicago. He is the only child of author Janet Cheatham Bell, who founded a self-publishing firm, and Walter Bell, who acted as Chairman of Swiss Re America Holding Corporation and Alabama’s Insurance Commissioner. Between ages five and 12, Bell lived in Boston, Massachusetts in the Mattapan neighborhood of the city. 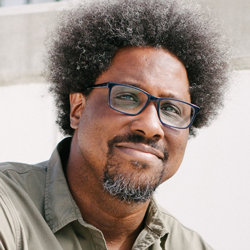 Bell is happily married to Melissa  Hudson.The couple met through their mutual friend in the San Francisco Bay Area in 2003 and tied the knot in March 2009.

They were blessed with two daughters – Sami Bell and Juno Bell in 2011 and 2014 respectively. His wife gave birth to their third child in June 2018.

Bell has an estimated net worth of $4 million.

Bell has authored a number of essays and blog posts about racism and race in American media and politics. In May 2017, he published his first book, The Awkward Thoughts of W. Kamau Bell: Tales of a 6’4, Asthmatic, Cisgender, Left-Leaning, Heterosexual, African American,  Black and Proud Blerd, Mama’s Boy, Dad, and Stand-Up Comedian. The book is a funny autobiography incorporated with essays about popular culture and politics.

Bell sits on the advisory boards of Race Forward, a racial justice think tank (formerly known as the Applied Research Center), and Hollaback!, an anti-harassment organization. In October 2013, he was named the American Civil Liberties Union celebrity ambassador on racial justice.

From 2010 to 2014, Bell co-hosted the podcast The Field Negro Guide to Arts & Culture with Living Colour guitarist Vernon Reid.

Since November 2014, he has co-hosted the Earwolf-produced podcast Denzel Washington Is The Greatest Actor Of All Time Period with writer and comedian Kevin Avery. In addition to reviewing the films of Denzel Washington one by one, the podcast has also featured interviews with prominent musicians, filmmakers, comedians, and actors including Issa Rae, Jesse Williams, Spike Lee, and Ava DuVernay, and Ryan Coogler.

Since June 2016, he has also co-hosted the Panoply/First Look Media-produced podcast Politically Re-Active with comedian Hari Kondabolu. The podcast explores American elections and politics with a comedic approach and includes interviews with journalists, activists,  and scholars such as Robert Reich, Ian Haney López, and Pramila Jayapa.

Bell began his career as a founding member of the comedy collective “Laughter Against the Machine” and since then he has emerged in renowned podcasts and publications, such as Citizen Radio, WTF with Marc Maron, and Current TV’s The War Room with Jennifer Granholm, on which Bell is a regular correspondent.

He had his first comedy album, One Night Only, which was released in 2007.  He later formed a one-man show entitled The W. Kamau Bell Curve: Ending Racism in About An Hour, “a comedic exploration of the current state of America’s racism”, that he has continued to periodically perform updated versions of the show.

He later had an album, Face Full of Flour, that was released in 2010, and was named one of the Top 10 Best Comedy Albums of the year by iTunes and Punchline Magazine. He as well wrote the blog “Kamau’s Komedy Korner” for the San Francisco Weekly from 2011 to 2012.

Bell is presently a sociopolitical comedian who is the host and executive producer of the critically-acclaimed Emmy Award-winning CNN Original Series, United Shades of America with W. Kamau Bell. He had his Netflix debut with a stand-up comedy special, Private School Negro in 2018.