A native of Chicago, Illinois, United States, Vicki Gunvalsonis a famous American businesswoman and reality television personality best known for a starring role as a housewife in the Bravo reality television series The Real Housewives of Orange County for fourteen seasons. She is the inventor of Coto Insurance.

Gunvalson graduated from Fremd High School in 1980 and enrolled at Harper College in Palatine, Ill. However, she finally decided college just wasn’t her thing after a year-and-a-half of studying, dropped out, and tried her hand at attending beauty school instead.

Gunvalson was born and raised in Chicago, Illinois to parents William and Joanne Steinmetz, and has five siblings: Billy, Kim, Kathy, and Lisa. Her father died in 1991 from Alzheimer’s Disease and her mother died in 2015 from unknown causes. She found out about her mother’s death during an episode of The Real Housewives and the aftermath was also shown. 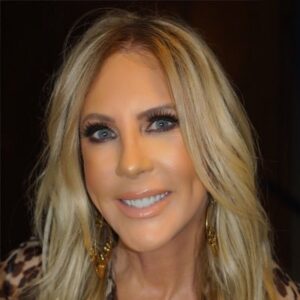 Gunvalson married her first husband Michael J. Wolfsmith at the age of 21 and they had two children, Briana Culberson (née Wolfsmith) and Michael Wolfsmith. At the age of 29, the duo divorced, and then she married Donn Gunvalson in the year 1994. The couple also founded Coto Insurance and Financial Services, after obtaining her insurance license in California. The couple could not go long and they split in the year 2014. ‘

She started a relationship with Brooks Ayers in 2014 but the two split in 2015. As of now, she is engaged to Steve Lodge, brother of Roger Lodge. She is enjoying her present life a lot without any disturbances.

Gunvalson has an estimated net worth of $7 million.

After her divorce from her husband, Michael J. Wolfsmith, Gunvalson started a part-time job at her father’s construction company. After her father’s death, she joined the health insurance business in 1991.

Later, she and her second husband, Donn Gunvalson founded Coto Insurance and Financial Services, after acquiring her insurance license in California. She is one of the original cast members of Bravo’s reality television show “The Real Housewives of Orange County”.

She announced her departure from the franchise in January 2020; in a statement, she said: “It’s been an incredible ride for 14 years and I want to thank all of you for your support, for your love, and for ‘whooping it up with me along the way”.She also hosts a podcast titled “Whoop It Up with Vicki”.Back then, she has also appeared in “Dr. Phil”, “Who Wants to Be a Millionaire”, “Tamra’s OC Wedding”, and “And the Doctors”.