Pennington is 57 years old as of 2021. He was born on 19 October 1964 in Atlanta, Georgia, United States. He celebrates his birthday on 19 October every year.

Pennington learned woodworking early in life and started teaching himself home improvement and carpentry. After attending Sprayberry High School in Marietta, Georgia, he first attended Kennesaw State University, where he majored in history and art.

He paid for his course through college by working during the day and carrying night classes, first working in landscaping before moving into construction. Despite his skills in carpentry, Pennington originally chose that carpentry wasn’t something he wanted to do professionally, citing his main interests were in specializing in Graphic Design and becoming an artist. On the advice of one of his professors, he moved to the Art Institute of Atlanta, from where he graduated with a bachelor’s degree in graphic design. 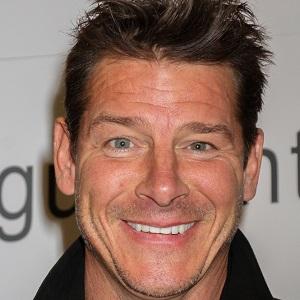 Pennington was born Gary Tygert Burton, the son of Yvonne Vickery. Yvonne separated from Ty’s father when he and his older brother Wynn were very young and spent several years as a single parent before she remarried. Her new husband adopted both boys, giving them his surname Pennington. He is of partial Cherokee descent.

Pennington is happily married to Kellee Merell since November 2021. The partners first met back in 2010 while Pennington was filming in Toronto. They remained linked through mutual friends and in early 2020, Pennington and Merell reconnected and chose to quarantine together.

In July 2021, the carpenter proposed to Kellee over morning coffee in his house. They tied the knot in a wedding ceremony In November 2021 with only eight guests in their under-construction home in Savannah, Georgia. Moreover, his wife Kellee Merell is a social media director initially from Vancouver.

Presently, Pennington does not have children. He was in a long-term relationship with Andrea Bock (dated for 13 years), however, the two never tied the knot and never had children or a daughter as per assumptions. Neither does Pennington has a child with his wife Kellee Merell as of May 2022.

Pennington has an estimated net worth of $12 million.

As a child, Pennington was plagued with behavioral problems until he was diagnosed with ADHD at the age of 17. He also discussed his ADHD with Glenn Beck.

Pennington has partnered with Shire Plc to raise awareness of ADHD in adults and facilitate the use of Vyvanse for the treatment of adult ADHD. He has been blamed for promoting the use of ADHD medications such as Adderall without revealing his subsidy.

During his final semester, Pennington was approached by a modeling scout and momentarily started a lucrative career in that field. He landed print jobs for Sprite, Swatch, and J.Crew, and appeared in television spots for Diet Coke, Bayer, Macy’s, and Levi’s, among others. His job as a model took him to places all over the world, as he went on to reside in Germany, Canada, Japan, Thailand, and Italy.